The Centre Pompidou in Paris has suspended a donation of some $619,000 from Vladimir Potanin, one of Russia’s richest men, as cultural institutions worldwide grapple with how to address the invasion of Ukraine. The news from Paris closely follows Potanin’s resignation from the board of the Guggenheim Museum in New York, where he had served for 20 years.

Beginning in 2015, the Centre Pompidou received two donations totaling €1.3 million ($1.4 million) from Potanin’s foundation, according to the French newspaper Le Monde. The report described the gift from Potanin as a “source of embarrassment.” The partnership reportedly enabled the Centre Pompidou to purchase nearly 500 artworks. 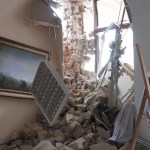 Potanin’s first donation, of about $638,000, financed the acquisition of around 250 works of Soviet and Russian contemporary art. The collection was displayed in a 2016 show, the production of which was backed by Potanin. The second gift from Potanin’s foundation was used to develop a program around the collection, which included a lecture series, additional publications, and grants for curators and researchers.

The suspended third donation of $619,000, scheduled for next fall, would have provided additional funding to the exhibition program. The Centre Pompidou does not intend to return any of the artworks featured in the exhibition, the museum said in a statement.

Potanin, who is chairman of the board of trustees of the State Hermitage Museum in Saint Petersburg, has been an important benefactor of Russian art globally. In 2021, his philanthropic program was recognized by the Corporate Art Awards held at the European Parliament in Brussels. Potanin’s patronage of the Centre Pompidou and Moscow’s State Tretyakov Gallery, was cited in the foundation’s application for the award. Upon receiving the award, the director of Potanin’s foundation, Oksana Oracheva, said the organization was committed to supporting cultural initiatives that helped “shape a positive image of Russia.”

In 2007, Renaud Donnedieu de Vabres, then the culture minister of France, made Potanin a “knight in the order of arts and letters.”

During his tenure on the board of trustees at the Guggenheim Museum, his foundation sponsored several important shows of Russian art, including the current exhibition of the Russian modernist Wassily Kandinsky. His foundation has also donated millions of dollars to the Kennedy Center for the Performing Arts in Washington, D.C.

His resignation from the Guggenheim came less than 24 hours after a State of the Union address in which President Joe Biden said the Justice Department would assemble a task force to investigate Russian billionaires. Potanin, whose wide-ranging portfolio includes banking, mining, and energy, is currently only sanctioned by Canada. In a statement addressing Potanin’s departure, the Guggenheim did not directly criticize its former trustee, but denounced Russia’s invasion of Ukraine.

Since the war began in February, Western cultural institutions have faced increased pressure to severe ties with known associates of Russian President Vladimir Putin. On March 1, Russian banking magnate Petr Aven resigned as a trustee at the Royal Academy of Arts in London. The Royal Academy also returned a donation from Aven which helped finance a Francis Bacon exhibition that was on view earlier this year. Aven, the owner of Russia’s largest commercial bank, Alfa Bank, is under sanctions from the U.K. and the European Union.

Two weeks later, the Tate in London ended its relationships with Aven, who was a member of an elite Tate donor program, and the Russian energy magnate Viktor Vekselberg. The news followed a new round of sanctions imposed on Vekselberg by the U.S. In a statement, Tate said Vekselberg had donated to the museum “seven years ago and no longer holds his honorary membership title.”

As of March 10, the United Nation estimates the civilian death toll in Ukraine is around 3,381, however the head of the agency’s monitoring operation said the actual figure is “thousands higher.” The constant bombardment by Russia’s military of eastern Ukrainian cities such as Mariupol, which was largely isolated from entry by humanitarian groups, has impeded efforts to rescue civilians or verify casualties.