CALENDAR CONFIRMATION.The new New York fair fromIndependent, which will focus on 20th-century art, wasjust announced in May, but it already has an exhibitor list, andit is 31 galleries strong,Maximilíano Durónreports inARTnews.Independent 20th Century, as the venture is called, will land at theBattery Maritime Buildingat the southern tip of Manhattan in early September as theArmory Showruns in Midtown. The galleries taking part includeCorbett vs. Dempseyof Chicago,Garth Greenanof New York, andParker Galleryof Los Angeles. About half of them will be doing an Independent fair for the first time. For more on the event,head toARTnews. 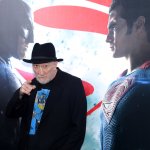 MARKET MOVEMENT.It not just atArt Baselwhere artworks areselling for substantial sums, defying the downturn in the equities markets: On Thursday, Heritage Auctionssold the cover art of the first issue of the vaunted miniseriesBatman: The Dark Knight Returns(1986) fora cool $2.4 million, theNew York Timesreports. Created byFrank Miller, it is the latest in a number of comic piece to sell for seven figures in recent years, as the paper details. Meanwhile,the market for female Old Mastershas been heating up in recent years, theFinancial Timesreports. “I think everyone, museums and private collectors alike, took a step back and thought about their collections and realized how important it was to make sure they had a diverse collection,”Calvine Harvey, ofSotheby’s, told the paper.

Good news forWalter De Mariafans: Two of his key installations in Manhattan,TheNew York Earth Room(1977) andThe Broken Kilometer(1979), are closing for temporary renovations that will allow them to stay open all year round. (They currently shutter for the summer.)[The Art Newspaper]

ArtistLydia Woodis at work on a project to make a drawing of every single pub in London, which number some 3,500. She has done “a few hundred” so far. Wood took up the project during the pandemic. “It did kind of stem from just being, you know, a pub person,” she said.[AFP/France 24]

Damien Hirst—boy king of the Young British Artists, indefatigable provocateur, prolific creator and collector—has been at it for more than 30 years now. Here are five of his most controversial works, from his dead shark to his diamond skull. [ARTnews]

A NEW BREW.Jerry Saltz, New York magazine’s Pulitzer Prize–winning art critic, is notorious for hisunusual coffee habit.For the uninitiated: It involves buying many cups of deli coffee each night, pouring them into7-ElevenBig Gulp cups the next day, and sweetening the elixir with Stevia. Buta change is afoot, he revealed on Twitter. “I am going to teach myself to make coffee,” Saltz wrote. “Explain this as if I were nine.” Some of his 543,000 followers have been kind enough to provide counsel.If you have advice, chime in![@jerrysaltz/Twitter]