The Hagia Sophia, a Byzantine-era religious building in Istanbul, Turkey, was reportedly damaged last week when heavy cleaning equipment cracked the marble floors. It is just the latest incident in recent years that has seen the site damaged.

The Hagia Sophia, constructed by the Eastern Roman Emperor Justinian I between 532 and 537, served as the largest Christian cathedral in the world until Constantinople was taken over by the Ottoman Empire in 1453. It was then turned into a mosque and subsequently into a museum by Turkish leader Mustafa Kemal Ataturk in 1935. Considered one of the most important religious and cultural sites in the world, it was deemed a UNESCO World Heritage Site in 1985. 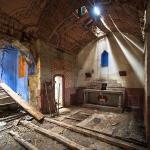 400 Religious Monuments in Spain Are in Serious Danger Due to Neglect, Organization Says

A Rare 2,000-Year-Old Roman Temple Is Unearthed in the Netherlands: 'A Beautiful Site'

In 2020, the Turkish government decided to convert the structure from a museum back into a mosque. The decision sparked controversy both globally and locally, and required that the Department of Religious Affairs take over control of the Hagia Sophia from the Ministry of Culture’s Department of Antiquities.

Since 2020, reports have documented other kinds of damage at the site. The Imperial Gate, also known as the Door of Repentance, which dates back to the sixth century, is one such example. The doorway stands at roughly 23 feet tall and is, according to the Byzantines, constructed of oak from Noah’s Ark. Above the door is a mosaic depicting Jesus alongside the Theotokos, or mother of Jesus and Saint Mary of Egypt—all of which were brought from the Holy Sepulcher in Jerusalem. The Imperial Gate would have been used solely as an entrance for the emperor.

Earlier this year on April 18, a group called the Turkish Association of Art Historians documented vandalism to the gate in a Twitter post. “We discovered that the historic Imperial Gate of Hagia Sophia is in such a state and we photographed it, around 20:45 tonight,” they wrote. The photo accompanying the post shows deep gouges in the wood surface.

Such incidents have raised questions about the site’s preservation since regular religious worship resumed.

“This historic building has faced tremendous damage,” a mosque tour guide told Turkish newspaper Cumhuriyet. “When Hagia Sophia was a museum, people visited it with great respect. It’s like a fairground now.”