Mosaics depicting the biblical heroines Deborah and Jael were uncovered by archaeologists in an ancient Jewish synagogue at Huqoq in Galilee, Israel. According to the University of North Carolina at Chapel Hill (UNC-Chapel Hill), which announced the find last week, these nearly 1,600-year-old mosaics are the first known depictions of the figures as described in the book of Judges.

The agricultural village Huqoq, near the sea of Galilee, features in the Hebrew Bible. An excavation project has been ongoing there since 2011, wherein archaeologists have focused their efforts on a synagogue from the late 4th or early 5th century CE that contains a number of colorful mosaics. 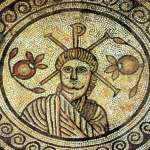 Following Covid-related delays, the latest iteration of excavations focused on a section of flooring in the southwest part of the synagogue. There, a team of specialists and students led by UNC-Chapel Hill professor Jodi Magness found a large mosaic panel depicting scenes described in Chapter 4 of the book of Judges, in which the prophet Deborah and military commander Barak lead the Israelites to victory over general Sisera and the Canaanite army. Following the battle, Sisera sleeps in the tent of the Kenite women, Jael, who drives a stake through his head and kills him.

The uppermost section of the mosaic shows Deborah under a palm tree as she looks at an armed Barak holding a shield. The middle section, of which only a small part is preserved, depicts Sisera seated. The lowest section shows Jael hammering a tent stake through Sisera’s head as he bleeds and lies dead on the ground.

“This is the first depiction of this episode and the first time we’ve seen a depiction of the biblical heroines Deborah and Jael in ancient Jewish art,” Magness said in the statement. “Looking at the book of Joshua chapter 19, we can see how the story might have had special resonance for the Jewish community at Huqoq, as it is described as taking place in the same geographical region—the territory of the tribes of Naphtali and Zebulon.”

Additionally, archaeologists found parts of a Hebrew dedicatory inscription. It appears inside a wreath flanked by 6-foot-tall panels that show two vases containing sprouting vines. These vines form medallions that frame four animals—a hare, a fox, a leopard, and a wild boar—eating clusters of grapes.

Earlier excavations have revealed mosaics depicting biblical subjects such as Samson and the foxes, Noah’s Ark, the parting of the Red Sea, and the construction of the Tower of Babel. They also include the earliest known depiction of a non-biblical story ever found in an ancient synagogue, an image showing the meeting between Alexander the Great and the Jewish high priest.

The newly found mosaics have been removed for conservation, and the excavated areas have been backfilled. Further excavations at the site are expected to continue next summer.