Why Climate Activists Are Gluing Themselves to Paintings Across theU.K.

Over the past couple weeks, activists associated with the climate activist group Just Stop Oil have attached themselves to the frames of famous paintings across cultural institutions in the U.K., from the National Gallery in London to the Kelvingrove Art Gallery and Museum in Glasgow. Thus far, the activists have attached themselves to works such as van Gogh’s Peach Trees in Blossom (1889) and J. M. W. Turner’s Thomson’s Aeolian Harp (1809). (Neither painting was damaged in the process.)

Hannah Hunt, a 23-year-old psychology student from Brighton, said in a statement released by Just Stop Oil that these actions would not end until the U.K. government makes a “meaningful statement that it will end new oil and gas licenses.” 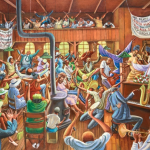 The actions have provoked some ire, a not uncommon response to the group’s strategies. But Just Stop Oil activists say that these actions are intended to capture the attention of a public that is fatally bent on ignoring the realities of climate change. When young Just Stop Oil activist Louis McKechnie attached himself to a goal post in the middle of a soccer game, not only was he the target of verbal abuses, one spectator leapt from his chair and attempted to stab McKechnie.

Today, ARTnews got on the phone with Simon Bramwell, a Reading-based cofounder of the Extinction Rebellion movement who recently joined Just Stop Oil activists when they attached themselves to Giampietrino’s The Last Supper (ca. 1520) on Tuesday at the Royal Academy of Arts.

ARTnews: Why did you begin practicing acts of civil disobedience?

Simon Bramwell: It started a some years back. I had been a nature educator. I would teach adults and children bushcraft, how to garden and survive in the backwoods, how to forage, make shelter, how to connect to nature. And in the past couple of decades, I’d been noticing how nature has been disappearing around me. It got to the point where I could no longer I can no longer stare kids in the eye, to be perfectly honest, and know that I’m trying to connect them to a nature that’s disappearing. The majority of the planet is in a state of either ignorance or indifference around the reality of climate change, and I think it’s absolutely vital that as many of us as possible involve ourselves in non violent civil resistance with the youth of this planet in mind.

Why target cultural institutions as the site of civil disobedience?

Politics will always follow culture, so it’s absolutely vital that we hold the ideals of our cultural institutions to account. And the hour is late. As a planet, we’re waking up to the fact that a 1.5-degree [Celsius] increase means catastrophe and that figure’s already in the rearview mirror. If we hit 2 degrees, that could mean that 20 percent of the Earth becomes uninhabitable. It’s time to bring the institutions of our culture on board in regards to the truth telling of these times.

How did the idea to attach activists to paintings come about?

I remember the shock when the Chinese dissident Ai Weiwei smashed that Ming era vase back in 1995. That was such an iconoclastic moment, and it was in a way a direct inspiration for these actions. We were asking: How do we cut through the noise, the endless back and forth of Tories and Labor, the school shootings? How do we do this in time and trying to wake people up to the fact that where we live is on fire?

I was reading some of the statements the activists had released and a similar refrain kept popping up: “I love art and I love this painting but I love the planet and people more.” Do we have to choose between art and caring about climate change? How do you interpret these statements?

It’s highly provocative and to a degree, I can’t get myself in the mindset of some of these young folks. I grew up during a relatively privileged era, but with what’s in front of them right now, I can absolutely see why they’d also make those comparisons. What they’re saying is that we need to set our priorities straight and set very pragmatic goals concerning the continuation of life on this planet. There are millions of people starving because of climate change–related causes, mass migrations are going to begin. This is not about negating the beauty of art but a way of saying that our priorities are absolutely fucked right now. There are people wandering around these art galleries finding beauty inherent in art that depicts nature, and yet are unable to comprehend the beauty that is disappearing with our ancient forests, or the hundreds of species that are going extinct each day.

Isn’t putting art at odds with survival a kind of dangerous path?

We are certainly headed for some very overt forms of fascism—it’s happening in your country right now, and it’s happening in mine with the political right. This is something that happens when inequality is highly visible. In times of scarcity people defer to authority. But this is why we need to challenge what’s at the core of our cultural values, because we can’t say that we’re civilized or that we have cultural values if we’re intent on ignoring the destruction of this planet and the suffering of people.

What do you think of how museums and cultural institutions are currently addressing climate change?

I think the interventions made so far have not worked, and like the environmental movement of the past 30 years, there is need for admission of failure. These lukewarm exhibitions around climate just won’t do, like the one the Royal Academy has on at the moment for their Summer Exhibition. There’s a big flag outside the exhibition entrancethat says “Lost Species” and it’s that kind of bullshit that we need to get beyond. These species aren’t lost. They’re not down behind the back of a sofa. They’re not in the sock drawer. They’re being destroyed, and they’ve been destroyed by a culture that is insisting on infinite growth within finite systems.

What we want is for all these institutions to not only admit the truth of these times, but also to support the idea that nonviolent civil resistance is the best pathway forward that we have right now and, on top of that, to support the youth who are going to be going literally through hell in the next 40 or so years.

How did the staff react when the action was performed at the Royal Academy?

The reaction from the museum staff was at first one of concern and incredulity. Once they realized we weren’t bent on destroying the painting but that we were only glued to a modern oak frame, they started relaxing. After that point, we started to connect with them and a lot of them were agreeing with us. They weren’t necessarily agreeing with our methods, but they were certainly agreeing with the need for such actions. We talked to a museum official, and at one point one of the security guards joined us in song, “There Ain’t No Mountain High Enough,” which was absolutely bloody beautiful.

Reactions to the Just Stop Oil actions haven’t always been so positive. Do you worry that these actions draw more negative attention than positive?

That’s a hard one. I worry about people’s safety, I worry for the young. But they feel that they don’t have anything left to lose, staring down the barrel of the climate gun, as it were. There’s always going to be a section of society that really struggles with comprehending the complexity of the ethical triage in front of us. It was the same for the suffragists in England who faced death threats, sexual abuse, brutality in prison, there are parallels in the U.S. with the civil rights movement. It’s absolutely vital to put ourselves in the way of the leviathan. We know that’s going to lead to bodily harm. We know it’s going to lead to reputational harm, to unpopularity. And yet there’s a clear need to tell the truth and to act like that matters.

So these actions are something that institutions in the U.K. should expect to keep happening for the foreseeable future?