Claes Oldenburg, Pop Artist Who Monumentalized the Everyday, Dies at93

Claes Oldenburg, whose oversize sculptures of everyday objects made him one of the leading artists of the Pop art movement, died in his home on Monday at 93. He had been recovering from a fractured hip. Representatives for Paula Cooper Gallery and Pace Gallery, both of which represent Oldenburg, confirmed the news.

Oldenburg, who often worked in collaboration with his late wife Coosje van Bruggen, made sculptures that raised objects as diverse as a nondescript light switch, a hamburger topped with a pickle, and a shuttlecock standing on end to the status of high art. If spotted in the real word, none of these would be particularly big objects, but Oldenburg rendered them larger than life, literally, so that they loom over viewers’ heads. 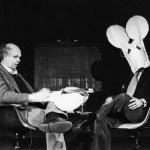 From the Archives: Claes Oldenburg's Awakening

During the ’60s, these oddly charming creations made Oldenburg one of the leading artists of Pop, a movement that embraced the visual language of advertisements and consumerism, and allowed it to invade art spaces that were still dominated by abstraction.

“I felt like the Ab Ex painters weren’t saying very much, and I wanted work that would say something, be messy, be a little mysterious,” Oldenburg told critic Randy Kennedy in 2017.

But Oldenburg’s art stood out among pieces by such artists as Andy Warhol, Roy Lichtenstein, and James Rosenquist because it was stranger, blunter, more overtly humorous. There was something truly unusual about making a sculpture of a toilet that looked like a deflated plastic blow-up, and Oldenburg often seemed to revel in it.

So, too, has the general public, which has greeted Oldenburg’s art in kind. His and van Bruggen’s 1985–88 work Spoonbridge and Cherry, a 51-foot-long sculpture of a piece of cutlery with a gravity-defying piece of fruit placed on its edge, is one of the most iconic public artworks in the United States. It has long been on view at the Walker Art Center in Minneapolis, which owns it.

“I was honored to have this great friendship with one of the most radical artists of the 20th century,” Pace founder Arne Glimcher said in a statement. “In addition to his inextricable role in the development of Pop art, he changed the very nature of sculpture from hard to soft, and his influence can be seen to this day.”

It was a statement that exemplified the ethos behind the six-decade career that followed, one in which life and art blurred entirely.

In a 1967 Artforum essay, critic Barbara Rose identified three realms from which Oldenburg drew his objects: “The Home, The Street, and The Store.” The last two of these were references to similarly named pieces staged in New York that put Oldenburg on the track to fame.

The Street (1960) was an installation staged near Washington Square Park in New York, at the Judson Memorial Church, in which viewers walked into an abject array of urban detritus—cardboard, tattered papers, dirtied pieces of newsprint, and more. (Though temporary, the piece was immortalized in a film in which Oldenburg and his partner at the time, Patricia Muschinski, don bandages and flail around inside it.) That work’s follow-up, The Store (1961), featured a crowded display of lumpy painted sculptures in an East Village space that evoked a shop where objects like dresses, shoes, and desserts were for sale.

Building on similar works known as happenings that were being staged by avant-garde artists across New York at the time, these two works succeeded in spinning the stuff of life itself into raw material for art-making.

“Every major artist dreams of reconstructing the world in his own image, but Oldenburg has actually succeeded in translating the external environment into a series of shapes and images that physically resemble the large, mesomorphic frame of Claes Oldenburg,” Rose wrote in Artforum.

If The Store and The Streetwere lo-fi pieces with a rough-and-tumble feel, the works by Oldenburg that followed were works that had a slightly more traditional vibe: soft sculptures of food, cars, and clothes that sagged, as though the air had begun to leak out of them.

These sculptures depict things that may look desirable, like a baked potato with two pats of butter on it or a mint-green ice cream cone. But because these unevenly painted works droop, they appear off-kilter and somehow unappealing. They are funny, too, and often quite winsome.

To make them, Oldenburg relied on old-school sculptural methods that involved a process of scaling up, starting with a model, then translating the design to a larger canvas, from which he would create a stencil. Muschinski would usually cut out Oldenburg’s proposed shape and sew it together. In order to create these sculptures’ puffy quality, Oldenburg filled them with foam rubber. Later on, Oldenburg began taking up these works in vinyl as well.

He said he prized the format because the sculptures could be easily manipulated as needed. “Every day, you can change it,” Oldenburg told Rose in a 2015 interview.

“The strikingly original early work was hugely influential on many artists, who were informed by his freedom of thought and radical mode of expression,” dealer Paula Cooper said in a statement. “When he began his collaboration with Coosje van Bruggen, with whom I had a close friendship, the work became grander and bolder. It was thrilling to work with Claes, whose odd take on things was delightful, and could completely turn one’s mood around.”

Not everyone was initially convinced of the soft sculptures’ merits. “At this rate you soon reach the point where you realize that in this kind of pop art there is nothing new except that it gives unexpected impact to banality,” critic John Canaday wrote in the New York Times in 1964 upon one of the first exhibitions devoted to Oldenburg’s work. “As soon as that impact wears off—but wait! Is that a big black cloud on the horizon? (Or just a swatch of patent leather?)”

Still, Oldenburg had gained enough admirers early on to obtain a place in the U.S. Pavilion at the Venice Biennale that year alongside Jasper Johns, Robert Rauschenberg, John Chamberlain, and Frank Stella. He also showed at Documenta 4 in 1968, where he showed his Giant Poolballs (1967).

Four years later, in 1972, Oldenburg returned to that famed recurring German art show, where he exhibited Mouse Museum, an installation that marked a return of sorts to his experimental roots. Set in a black Mickey Mouse–shaped gallery, the installation collected small painted sculptures of food and other objects. “It’s intended to be a symbol more of mental action than Mickey Mouse, which is more about fun,” Oldenburg once told the Museum of Modern Art of the gallery’s shape, which continued to appear in his work.

Begun in 1965, Mouse Museum was later revised by Oldenburg in 1977 to include an area that he called the Ray Gun Wing, after a similarly titled 1959 sculpture. It featured objects that had right angles in them. As if to further that idiosyncratic choice, Oldenburg told MoMA, “If you spellRay Gun backwards, it’s ‘Nugyar,’ which is very close to ‘New York.’ New York, Nugyar.”

Oldenburg was born in 1929 in Stockholm. His father was a Swedish diplomat who worked in New York, and in 1936, the family relocated to Chicago, where Oldenburg père began work at the Swedish consulate. All the while, Oldenburg began furthering his own interest in art, particularly drawing.

But unlike most children, Oldenburg, in his own recounting, seemed to exhibit an inclination toward conceptualism early on. He described developing his own country, Neubern, which was sited in the South Atlantic and existed mainly in the form of drawings. When he attended Yale University as an undergraduate, he majored not in art but in literature and art history.

Upon graduating in 1950, Oldenburg took up journalistic work. One of his stories—which were always “unimportant,” he told the Los Angeles Times—revolved around an old man who spent his life amassing a collection of trinkets, and Oldenburg began to do the same, plucking scraps from the street and keeping them for himself. He moved to New York in 1956 and later achieved fame there.

Although Oldenburg worked on an increasingly large scale, he continued to emphasize the mundane, sometimes in explicitly political ways. Lipstick (Ascending) on Caterpillar Tracks, from 1969, features a large rendering of a cosmetic placed atop a tank-like structure; it was envisioned as a site where students could opine about anti–Vietnam War sentiments, and can still be seen in New Haven, Connecticut, today on Yale’s campus.

Many more public art projects followed. At Oberlin College in Ohio, Oldenburg made a giant Cor-Ten steel sculpture of a plug that appeared to emerge from the ground. And in Philadelphia, he made a sculpture of a clothespin that rises 45 feet into the air.

In the decades after, Oldenburg would continue to make these large-scale works with van Bruggen, whom he married in 1977. (He and Muschinski divorced in 1970, and Oldenburg was in a relationship with artist Hannah Wilke for a period after that.) With van Bruggen, who died in 2009, he crafted an ice cream cone dropped upside-down atop a Cologne mall, a trowel standing upright in Des Moines, a box filled with bent matches in Barcelona, and many others.

A series of major shows for Oldenburg has coincided with commissions for these grand permanent works. In 1995, Oldenburg was the subject of a retrospective at the National Gallery of Art in Washington, D.C., and the Guggenheim Museum in New York, and in 2009, he had another career-spanning show at the Whitney Museum. His work will appear in the Carnegie International later this year.

Despite the fact that his work grew to proportions that art rarely ever tends to reach, Oldenburg, who was always plainspoken in interviews, described these monumental works in decidedly small terms.

“A tiny sculpture can be just as powerful as a large one,” he told Frieze in 2015. “It’s all really about imagination and fantasy, and that’s very much a part of my outlook in art.”