Authorities in Italy have blocked a Viennese auction house from selling a painting by the 17th-century artist Artemisia Gentileschi.

The Carabinieri’s unit overseeing crimes related to cultural property allege that two sellers, whose identities have not been disclosed, fraudulently catalogued the work as having been painted by an anonymous follower of Gentileschi.

Titled Caritas Romana, the scene is taken from the first-century Roman historian Valerio Massimo’s story of a woman named Pero covertly nursing her imprisoned father, Cimon, who is dying of starvation.

The move to conceal the true attribution of the work, which authorities believe was painted by the now-heralded old master herself, allowed the dealers to procure an export license from the Italian cultural ministry for the work. 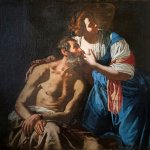 Gentileschi is known for breaking ground as a female artist working in a male-dominated field. The daughter of painter Orazio Gentileschi, she established a career as an artist by the age of 20 and became known for a style influenced by Caravaggio. Amid her rise, at age 18, she survived a sexual assault by her mentor and a highly public trial in Rome.

Many of her canvases depict subjects from biblical and mythological episodes. Gentileschi often emphasizes the plights of women throughout her scenes, rendering them wielding weapons or acting in defense against male antagonists.

The painting was exported to Austria in 2019. Italian police began an investigation around the attempted sale of the painting in 2020. Authorities say the artwork is valued at around 2 million euros ($2 million) and that it was originally commissioned by an Italian noble in the mid-17th century and kept at a castle in the Italian province of Bari.

Gentileschi’s market has been on the rise amid renewed scholarly attention to the long-overlooked artist. The estimated value for the current painting makes it one of the more valuable attributed to her. Her current auction record is $5.3 million paid for the her undated canvas Lucretia in 2019.