Archaeologists from the Autonomous University of Barcelona discovered ancient engravings that are around 14,000 years old, the researchers announced in a statement.

The Upper Paleolithic–era engraving was found near the city of Lleida, which is about an hour away from Barcelona. The archaeologists had been working on the site for some time, having previously discovered the partial skeleton of a woman the researchers have dubbed Linya, her name a reference to the cave she was found in, Cova Gran de Santa Linya.

The engravings, though found at the same site, predate Linya by a few of centuries, according to the carbon dating research. According to the archaeologists, the fragment helps put together a larger tapestry of the lives of the first settlers of Spain’s northeastern region. 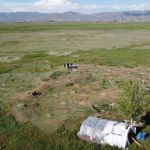 Jorge Martínez-Moreno, a researcher who helped found the engraving, said in a statement, “There are elements and visual resources with which to narrate stories or specify spaces that denote that the person or persons who executed them were intelligent and technically skilled, and that combining few lines were capable of generating visualizations with a high empathic content that we have been able to decode thousands of years later.”

While the naked eye can’t quite make out the engraving, a 3D scan helped reveal the figure that was a Pyrenean ibex colloquially known as a bucardo.

The Pyrenean ibex has been extinct since 2000, as hunting pressures, and later interspecies competition with domesticated grazing animals like cattle, depleted its small population. The Pyrenean ibex, in fact, became extinct twice. First, the last ibex was killed by a fallen tree in 2000. Then, in 2003, Spanish scientists managed to clone an ibex and bring it to term, but the kid died shortly after birth due to a lung defect.