All the Beauty and the Bloodshed,Laura Poitras’s new documentary about acclaimed photographer Nan Goldin’s activism against the Sackler family, was awarded the Golden Lion for best film at the 79th Venice International Film Festival on Saturday.

The film, which explores Goldin’s years-long campaign to expose the Sacklers’ role in exacerbating the opioid crisis and their ties to the art world, became one of the few documentaries to win the prestigious award.

Poitras, the American filmmaker best known for the 2014 Oscar-winning Edward Snowden documentary Citizenfour, thanked the festival for recognizing that “documentary is cinema” at the ceremony Saturday evening in Venice. 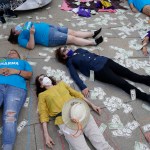 Goldin, who struggled herself with substance abuse after being prescribed OxyContin after a surgery, has led one of the most sustained campaigns against the influential Sackler family who, through Purdue Pharmaceuticals, have been accused of aggressively marketing the highly addictive painkiller OxyContin.

“I believe I owe it to those affected by this epidemic to make the personal political,” Goldin wrote inArtforumin 2018.

Goldin and her activist groupP.A.I.N.(Prescription Addiction Intervention Now) have staged dozens of actions at museums worldwide, including the Guggenheim Museum in New York, the Smithsonian Institution in Washington, D.C., and the Harvard Art Museums in Massachusetts, all of which had previously accepted donations from members of the Sackler family, one of the world’s leading arts philanthropists. In response to the protests, many art institutions have distanced themselves from the family, in some cases removing or deemphasizing the Sackler name from major gallery wings, and no longer accepting Sackler philanthropy.

Goldin also helped form the Ad Hoc Committee for Accountability with parents of children who died because of OxyContin addiction. The group took the Sackler family to court to demand accountability of their role in drug epidemic, which has claimed nearly a million lives in America, according to theCDC.

In 2021, a US bankruptcy court approved a controversial settlement plan that ordered the Sackler family to relinquish control of the company and pay some $4.5 billion to the families of the deceased over nine years. The Sacklers have not been charged with a crime.