The government of Poland will formally ask the Russian Federation to return seven paintings from a state-run Moscow museum that were looted during World War II.

In a statement this week announcing the move, Polish Culture Minister Piotr Gliński said around 20 previous requests to Moscow for the return of other works taken during the war have been ignored by the Russian government. Among the works Poland has sought to retrieve are paintings by Old Masters such as Dürer, Holbein, and Cranach and manuscripts as well as historical archives related to the Holocaust. 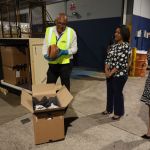 The subject of the current formal restitution claim are seven paintings by Italian artists that are currently held at the Pushkin State Museum of Fine Arts in Moscow. They were produced between the 14th and 18th centuries by artists such as Spinello Aretino and Lorenzo di Credi.

The works were looted by the Red Army, a faction of Russian forces, during the World War II. Prior to their seizures, some were held in the collections of the Czartoryski family in Gołuchów, at the Wilanów Palace, and in Poznań, Wrocław and Łódź.

“Traces of hundreds of thousands of items lead to the Russian Federation and to the former Soviet republics,” said Glinski in a press conference. The minister added that Russia is the only country among several others that Poland has approached that has so far not responded to the government’s restitution claim.

Poland’s ties with Russia continue to be strained amid Russia’s invasion of its neighboring Ukraine in February and an ongoing refugee crisis caused by the conflict. Poland has been a backer of Kyiv during the war and has supported EU sanctions against Russia.