Independent Curators International, the New York–based nonprofit that looks to support the work of curators around the world, will give its 2022 Leo Award to Candice Hopkins, one of today’s most closely watched and influential curators. Hopkins will share the award with the nonprofit American Indian Community House.

Hopkins, a citizen of Carcross/Tagish First Nation, is the inaugural director and chief curator of Forge Project, “a Native-led initiative centered on Indigenous art, decolonial education, and supporting leaders in culture, food security, and land justice based in the Mahicannituck valley on the unceded homelands of the Muh-he-con-ne-ok, the Peoples of the Waters That are Never Still, who now reside in Wisconsin and are known as the Stockbridge Munsee Band of Mohicans,” according to a release. 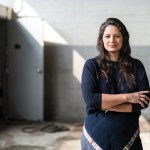 The Sound of Listening: Candice Hopkins’s Curating Lets Indigenous Artists Do the Talking

Can Land and Water Be Archives? A Pandemic-Era Toronto Biennial Mines the Histories Beneath Our Feet

Founded in 1969, the American Indian Community House provides community support, including elder care and raising awareness around HIV/AIDS within Native communities, to the 35,000 Native Americans, from more than 70 Indigenous tribal affiliations, in New York City. The organization also maintains an exhibition space, AICH gallery, that has shown work by artists like Greg Hill and Mario Martinez.

In addition to her work at Forge Project, Hopkins has been known for her curatorial work around the world that has charted new paths for the ways in which the work of Indigenous artists is supported, presented, and written about. Most recently, she served as the senior curator for the first two editions of the Toronto Biennial of Art. She also was a member of the curatorial team of Documenta 14 in 2017, and helped organize several editions of the SITElines biennial at SITE Santa Fe in New York. She also worked on the curatorial team for the Canadian Pavilion at the 2019 Venice Biennale.

Additionally, Hopkins has also been a co-curator on numerous groundbreaking group exhibitions focused on Indigenous artists, including “Close Encounters: The Next 500 Years” a multi-venue exhibition in Winnipeg in 2009, “Sakahàn: International Indigenous Art” at the National Gallery of Canada in 2013, “Art for a New Understanding: Native Voices, 1950s to Now,” at Crystal Bridges in Arkansas in 2018, and “Soundings: An Exhibition in Five Parts,” which debuted in 2019 and has since traveled to seven venues through ICI.

For Hopkins, her curatorial practice is grounded by the question, as she told ARTnews in 2019, of “How can we open up a space again to other voices?” She added, “In art we have these very bad tendencies to represent the ‘other.’ We can still have more complicated discussions about identity, but, in order to have them, we have to confront that. It’s more of a deeper question of who’s representing whom and who’s speaking for whom.”

Past recipients of the Leo Award include Steve McQueen, Patrizia Sandretto Re Rebaudengo, Miuccia Prada, Michael Govan, Marian Goodman, and Dimitris Daskalopoulos, among others.

In a statement, Renaud Proch, ICI’s executive and artistic director, said, “All of us at ICI are so deeply grateful to Candice for the opportunity to work with her, and we are proud to recognize her alongside the American Indian Community House—and so many people who have accompanied them along the way—for their tireless work to promote Native American contemporary art. This year’s honorees represent the potential of curatorial work to make history every day; to create spaces for artists who open our eyes to a complex understanding of the world; and to put people in relationship to one another, strengthening communities through art.”