With Ascension of King Charles III, Ethiopian Government Renews Calls for the Restitution of its Holy Tabot from Westminster Abbey

The Ethiopian government is renewing calls for therestitutionof a holy object hidden inside an alter inLondon’s Westminster Abbey.

For the Ethiopian Orthodox Church, the tablet, known as a tabot, represents the Ark of the Covenant, and it is considered sacrilege for it to be seen by anyone other than clergy. The tabot in Westminster was looted in 1868 by British troops at the Battle ofMaqdala, along with hundreds of other cultural treasures looted.

The procedure fordeaccessioningartifacts from Westminsiter Abbey is a legal gray area. The Abbey is known as a Royal Peculiar, which puts its properties under the jurisdiction of the monarchy. TheArt Newspaperreports that any restitution may require the approval of the new British monarch, King Charles III, who ascended to the throne last month following the death of his mother, Elizabeth II. 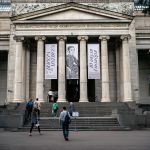 Poland to Ask Russia to Return Paintings Seized During WWII

Following the British raid, the Maqdalacollection was scattered among the collections of various Western museums, such as the British Museum. One tabot was donated to the Abbey byCaptainGeorge Arbuthnot of the Royal Artillery and later incorporated by architect George Gilbert Scott into the designs for an altarpiece in the Henry VII Lady Chapel, where it was visible to visitors.

The Ethiopian government has campaigned for years for the restitution of the looted tabots, to varying success. In 2002,the Church of St John the Evangelist in Edinburgh returned a tabot that had been discovered in a cupboard. Three years laterthe British Museum moved its collection of 11 tabots to an underground store that staff are prohibited from entering.

Westminster Abbey, however, has refused all appeals from Ethiopia. In 2007, thehead of the Ethiopian Orthodox church, Abune Paulos, traveled to London to directly lobby a representative of the Abbeyfor its return. The tabot, however, was not returned, though in 2010 a covering was placed in front of the tabot, and an inscription reading “Fragment of an Abyssinian Altar brought from Magdala in 1868” wsa removed from view.

In 2018, a Westminister Abbey spokesman said, “The dean and chapter are very conscious of the sensitivity of the Ethiopian tabot, so steps were taken a number of years ago to ensure that the tabot, which is in a very sacred place, was properly covered and could not be seen by anyone.”

Speaking tothe Art Newspaperlast month, an Abbey spokesperson said that “there are no current plans [for its return], but the future of the tabot is kept under review,” and that the Abbey has “no plans to change these arrangements.”