Silke Otto-Knapp, a painter whose muted watercolors often depict landscapes and dancers, has died at 52, according to her Los Angeles gallery Regen Projects. The Los Angeles Times reported that Otto-Knapp had been battling ovarian cancer.

Otto-Knapp’s works had been widely seen at venues in Europe and the U.S., as well as in biennials such as Made in L.A. at the Hammer Museum, the Bienal de São Paulo, and the Liverpool Biennial. A solo exhibition by her will open this month at New York’s Galerie Buchholz, which also represents her; another will appear in November at the Casa Mutina Milano in Italy. 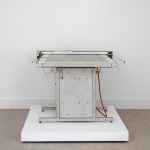 Her paintings frequently alluded to similarities between visual art-making and dance, with experimental choreographies by the Judson Dance Theater, Yvonne Rainer, and the Ballet Russe acting as her inspirations. She relied on watercolor, which she utilized in ways that are quite unlike what is traditional for that medium.

She made the decision early on to avoid painting in watercolor on paper, since she found doing so to be overly “illustrational,” as she put it in an interview last year. Instead, she painted on canvas, a medium more commonly identified with oil painting. And, whereas watercolor typically bears strong evidence of the painter’s hand, with inky strokes that are individuated, Otto-Knapp’s work was done at a colder remove, without easily seen brushwork.

In a 2017 review of an Otto-Knapp show at Mary Boone Gallery in New York, the New York Times’s Jason Farago wrote that her art could be compared to the paintings of Marlene Dumas and Luc Tuymans, who likewise work in a figurative mode and with a pallid color scheme. But, Farago said, “Ms. Otto-Knapp is a more emotionally complex artist than those reliably gloomy artists. Her paintings’ muffled beauty chimes more with the terse poetry of Louise Glück, or the pared-down records of Radiohead.”

Otto-Knapp was born in 1970 in Osnabrück, Germany, and was based at various points in London, Vienna, and Los Angeles. She received a masters degree from the Chelsea College of Art and Design, as well as a degree in cultural studies from the University of Hildesheim.

Her breakthrough works from the early 2000s are watercolors based on ready-made photographs. Many of the source imagery was found by Otto-Knapp, although some of it was snapped by the artist herself. In these works, landscapes are painted runny, so that they dissolve into abstraction.

For her paintings of dancers, she continued to rely on photographic images as inspirations, but she moved farther away from her sources. Performers are recognizable in her work, but if they are depicted, they can only be half-seen, causing the figures to sometimes appear spectral. At times, with the grayish hues, the paintings even come to seem silvery, as though they were bathed in moonlight—an effect enhanced by the way that Otto-Knapp’s figures come in and out of focus, depending on where a viewer stands in relation to one of her paintings.

“Evoking dance scenes and figures but radically altering them and destabilizing them through her monochrome watercolor technique,” critic Tom Holert wrote in Artforum, “she extends the ongoing, unresolved relationship of dance and the visual arts.”

She also made forays into the well-trodden genre of portraiture, making pictures of people like the artists Emily Carr and Florine Stettheimer. When these women were depicted by Otto-Knapp, they had no recognizable features. “I call them portraits, but they don’t have faces,” she told the Globe and Mail in 2015, the same year she had a mid-career retrospective at the Art Gallery of Ontario.

Otto-Knapp’s work currently resides in the holdings of that museum, as well as the Museum of Modern Art in New York, Tate Modern in London, the Art Institute of Chicago, and more.

In some of her recent shows, she had begun pushing the theatrical elements of her painting even further, showing them on freestanding walls that caused the canvases to seem like backdrops. She described this choice as part of an attempt to make her work relate to the exhibition space in which it is set.

“Otto-Knapp made an indelible impact through her singular work as an artist,” Regen Projects said in a statement. “Her generosity as a friend, mentor, colleague and teacher was deeply felt by all that encountered her.”