This year’s Marcel Duchamp Prize, France’s top art award, has gone to Mimosa Echard, whose multidisciplinary practice bridges the surreal, mechanical, and terrestrial in pursuit of plant and human symbiosis. The annual award carries a prize of €35,000 ($41,000) and is administered in partnership with the Centre Pompidou in Paris.

Echardhas a research-led practice that spans assemblage, painting, ceramics, and video games. Her projects often plunge the viewer into richly imaginative worlds where ecological concerns are indivisible from the effects of desire, hunger, and humor. 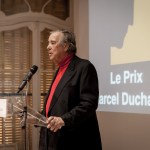 In her role-playing game,Sporal, which was distributed this year at an exhibition at Palais de Tokyo, the protagonist, a single-cell organism, attempts to mutate into more advanced life-forms using others’ bodily fluids. The protagonist was based off myxomycetes — a funguslike being known as slime molds —which engulfs and fuses with organic matter by means of ceaseless slimesecretions. For the Marcel Duchamp Prize, she designed what she calls an“ambiguous architectural object,” an uninterrupted water screen reminiscent of human liquids — blood, tears, and urine.

“I’ve wanted to work with water screens for a long time, I’ve been thinking about this piece for a long time, you could say it’s a liquid painting, but it’s also an encrypted image, it’s also an inaccessible space,” she said in a statement. A video of a woman, flitting in and out of frame, plays behind the falling water.

Echard explained that the works also touch on more insidious circulation: the process in which hormone medication passes through a menpausal woman, back into water sources, and is then supplied to crops—an infinite loop.

Also nominated for the award were artistsGiulia Andreani,Iván Argote, and Philippe Decrauzat; new work by thefinalists is on view at the Centre Pompidou through January 2.