Last week, two Just Stop Oil protestors prompted headlines around the world when they threw two cans of Heinz tomato soup at van Gogh’s Sunflowers painting at London’s National Gallery. One of the climate activists has now explained why, in a viral video withmillions of views on TikTok and Twitter.

“I want to make one thing perfectly clear, we did no damage to the painting whatsoever,” Phoebe Plummer, a climate activist who, along with Anna Holland, threw the soup at the famous painting and then glued their hands to the gallery floor on October 14. 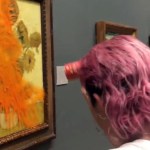 Soup-Splashed Van Gogh Goes Back on View, Kurt Schwitters's Merz Barn to Be Sold, and More: Morning Links for October 17, 2022

In the video, Plummer tells the camera the protest looks like a “slightly ridiculous action,” as she wears an orange safety vest and stands next to a Heinz soup can.

“We’re not asking the question, should everyone be throwing soup at paintings?” said Plummer. “What we’re doing is getting the conversation going so we can ask the questions that matter.”

The issues that Plummer said she hoped to draw attention include the large number of fossil fuel licenses U.K. Prime Minister Liz Truss has granted, the amount of subsidies that fossil fuels receive compared to renewable energy despite the significantly lower reported cost of offshore wind, and the connection to the current cost of living crisis in the UK with growing concerns about the cost of energy.

“We’re using these actions to get media attention to get people talking about this now and we know civil resistance works, history has shown us this works,” she went on. “I’m standing here as a queer woman and the reason that I’m able to vote, go to university, and hopefully someday marry the person I love is because of people who have taken part in civil resistance before me.”

The videos of Plummer talking about the Just Stop Oil protest action have been viewed on TikTok 1.7 million times and on Twitter 7.1 million times since they were posted on Monday.

Holland and Plummer were arrested after the action by London Metropolitan police on charges of criminal damage and aggravated trespass.

However, the US financial backers of Just Stop Oil told The Guardian more protests would be happening in the near future due to all the press attention.

“This is a rapidly growing movement and the next two weeks will be, I hope, the most intense period of climate action to date, so buckle up,” said Margaret Klein Salamon, executive director of the Climate Emergency Fund.