GEORGE BOOTH,theNew Yorkercartoonist whose beloved work captures humans, cats, and dogs getting up to all sorts of bizarre, glorious trouble,died on Tuesdayat 96, theNew York Timesreports. The magazine’s editor,David Remnick, said that Booth “created an astonishing world, one that was wholly his own: chaotic, strange, beyond hilarious,” according to theAssociated Press. Booth began contributing to theNew Yorkerin 1969, and was responsible for around 20 covers and many, many more cartoons inside its pages. In the first issue after the 9/11 terrorist attacks, he contributed its only cartoon. The publication had said it would not run any, but he still sent in a drawing with one of his regular characters, an older woman namedMrs. Ritterhouse.She is sitting quietly, head lowered, as a cat buries its head under its paws. 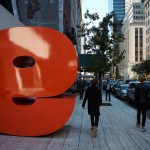 RESTITUTION WATCH.Croatia is signaling it willmake efforts to return artstolen from Jewish people during the Holocaust, theNew York Timesreports. With theWorld Jewish Restitution Organization, it has published a report of some looted material held in museums in the country and its culture ministry has established a group to conduct provenance research. Its minister of culture,Nina Obuljen Korzinek, said in a statement quoted by theTimesthat the government“shares the wish to provide Holocaust survivors and their heirs with a fair measure of justice.” There have not yet been any restitutions.

TheSolow Art and Architecture Foundation, which holds the late real-estate magnateSheldon Solow’s art collection, said that it plans to open a museum next year. The nonprofit has faced criticism for not providing public access to that art, which have been housed in theSolow Buildingon 57th Street in Manhattan.[Artnet News]

No timetable has been announced, but theBritish Museumwill prioritize a refresh of its galleries for Greek and Assyrian art, where theParthenon Marblesare located, in a renovation plan for which it is currently raising £1 billion ($1.12 billion).[The Art Newspaper]

What’s next forMarc Spiegler, who isstepping downasArt Basel’s global director at the end of this year? “I’m having a lot of conversations, but asChris Dercononce advised me, ‘Never take the first train.’ ” A veteran museum leader, Dercon wasrecently named directorof theFondation Cartier.[Financial Times]

Phaidonis putting out a new monograph of the photographerSteven Klein, and he got the profile treatment fromJacob Bernstein. His photos “have edge,” designerTom Fordsaid. “They can be slightly shocking, not in an extreme way but in a way that makes you stop and look closely.”[The New York Times]

Red Hot Chili Peppersbassist and art collectorFleahas listed his compound in La Crescenta, California, for $8.8 million. It consists of three structures, one of which was designed byRichard Neutra.[Architectural Digest]

A FAMILY AFFAIR.InArchitectural Digest, writer and filmmakerLena Dunhamhas an article aboutbuilding a house for herselfin Connecticut, right behind the one where her parents, artistsLaurie SimmonsandCarroll Dunham, live. Her mother and father advised on the project, and the younger Dunham relays some choice anecdotes about the whole process, including this one: “I was gone when they broke ground, getting occasional updates—like the time my father sent me a text of shirtless construction workers placing shingles in the blazing sun with the words ‘hot guys on your roof.’ Thanks, Pop.”[AD]