In a paper published Monday by the Cambridge journal Antiquity, archaeologists revealed that they have unearthed a host of new artifacts in Southwest China.

The discoveries come from the Sanxingdui site, which translates to “Three Star Mound” and was a Bronze Age culture located in western Guanghan County, close to the city of Chengdu. The site has been in a state of constant excavation since 1987 and was first discovered in 1927, when a farmer unearthed a cache of jade relics.

In 1986, researchers found large treasure troves buried in the Three Star Mound site. In recent years, scholars have concluded that these deposits of hundreds of bronze, gold, jade and ivory artifacts represented a ritual sacrifice of valuable objects, a kind of public performance meant to create community bonds. As such, archaeologists have redoubled their efforts in finding the sites where these objects were sacrificed. Their work has resulted in the discovery of six new pits where the Three Star Mound people did away with their treasures. 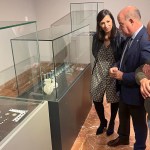 Pyramid of a Previously Unknown Queen, Hundreds of Mummies Discovered in Egypt

These pits held different kinds of relics. Most held bronze objects popular in the Bronze Age in deeper deposits, with ivory in the upper deposits. One pit held a wooden chest with traces of cinnabar pigment that led researchers to conclude the chest was once painted red. It is unclear if the chest has been opened yet. Fragments of textiles have also been found, along with gold foil objects.

The bronze objects found are finely crafted figurines. One of the figurines had a Zun stacked on its head, a kind of intricate ritual vessel with a unique dragon pattern. The other figurines feature the repeated motif of a man kneeling, twisting his head, his palms raised at the neck, palms facing each other. A long piece of bronze is attached to the head, it looks as if it is a textile shooting straight up, unwound from the figure’s head wrapping.

The majority of the gold foil objects were simple and flat, depicting simple shapes, like stripes, circles, and birds. However, a large gold mask was also found that could be one of the largest of its kind dated to the Shang and Zhou Dynasties, which occurred between the seventeenth and third century BCE.