Meda Mládková, a collector who amassed a significant grouping of work by Czech artists, including the famed modernist František Kupka, has died at 102. The Museum Kampa, an institution in Prague that she founded, posted about her passing on Tuesday on social media.

“Meda, although she lived a large part of her long life abroad, was always a great patriot and loved the Czech nation,” the museum wrote. “When political circumstances allowed her to return to the country, she contributed to the cultural development of the Czech Republic like few others.”

Born Marie Sokolová in 1919 in Zakupy, Czechoslovakia, Mládková spent a large part of her life outside her home country. Prior to World War II, she worked as a director at local brewery and then later for Škoda Auto. After the war, she moved to Geneva to study for a Ph.D. in economics. She was in the Swiss city in 1948, when the Soviets assumed control of her home country, and she remained outside Czechoslovakia in the years after that. 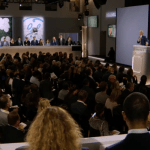 Warhol's Bullet-Marred Portrait of Marilyn Monroe Sells for $195 M., A Record for the Pop Artist

Being based outside the country, now known as Czechia, helped put her in contact with some of the artists with whom she established close days. In Paris, Mládková became friendly with Kupka, a painter known for his abstractions in which planes of color appear to be refracted through one another. With her husband Jan, an economist who died in 1989, Mladkova amassed more than 200 paintings by Kupka, making her collection of his art one of the deepest ones in the world.

Mládková’s enthusiasm for Kupka ran deep. According to the leaders of the Museum Kampa, Mládková once even sold her home to buy a Kupka painting called Localization of Graphic Motifs II (1912/13). In 1984, she gave the painting to the National Gallery of Art in Washington, D.C., where it still resides today.

Also included in her collection were around 240 works by Jiří Kolář, a poet who also crafted collages in which images of notable artworks are split apart by pieces of text, as well as 17 sculptures by Otto Gutfreund, a Cubist who picked up facets of the movement while studying in Paris.

As recently as 2012, Mládková was still dividing her time between Washington, D.C., and Prague, where she returned in 1989. In 2003, she opened the Museum Kampa.

The Czech politician Jiří Pospíšil, who serves as the museum’s board chairman, wrote on Twitter on Tuesday, “All her life she believed in the idea: ‘If culture survives, the nation will survive.’”