At this year’s Independent Fair in New York, there are the requisite “rediscoveries,” like Birgit Jürgenssen, straight from the Venice Biennale to Galerie Hubert Winter’s booth, and the semi-unexpected oddities, like Renate Druks’s perplexing paintings of cats, now on view in a showcase courtesy of the Ranch. But nothing makes an impression in quite the same way as a pair of outstretched alien hands that loom over one floor of this fair.

Made from aluminum and affixed to a peace sign, those hands are part of a 1993 H. R. Giger work known as Leben Herhlaten (Life Support). New York gallery Lomex brought the sculpture to the fair, along with some others by the artist, who is known, among other things, for designing the Xenomorph of the 1979 horror movie Alien. For the Independent presentation, Lomex borrowed the sculpture from Giger’s foundation in Switzerland. 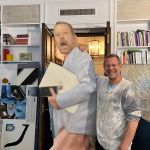 “It was produced as an artwork that was really dealing with Cold War anxieties and with nuclear war,” said Alexander Shulan, a dealer who founded Lomex. “The peace sign was originally created as an anti-nuclear war image, so the artwork is designed by him in response to that. It’s one of his most famous pieces.”

Leben Herhlaten has had an unusual life, as artworks go. It appeared especially menacing when it was featured on the cover of the 1993 album Heartwork by the death metal band Carcass, and it later hung in a room given to Giger’s work at the now defunct New York nightclub Limelight, where it was arranged like a crucifix.

Leben Herhlatencould be yours to take home — it’s for sale, though a price is available only on request. (Another work by Giger at the Lomex booth, a wall-hung aluminum piece that features what looks like an extraterrestrial whose forms are composed of mechanical parts, is priced at $25,000; others run at $7,500 a piece, plus the costs of framing.)

The Giger work’s presence at an art fair is less unusual than it might at first seem. His art has been a touchstone for a number of artists making work about technology and the body.

His sculptures even figured in museum shows as of late, with the Schinkel Pavillon in Berlin staging two shows devoted to it in the past year—one placing it in dialogue with works by Mire Lee, a South Korean sculptor several generations Giger’s junior, the other with works by Surrealist artist Hans Bellmer, a forerunner to Giger.

And there is a more general hunger for Giger’s work right now, as evidenced by the crowds that mobbed Lomex any given day earlier this year, when a survey devoted to him was on view.

But this booth isn’t only about Giger — it also features work by two gallery artists, Oto Gillen and Valerie Keane. Gillen is represented by a sinister-looking, 15-foot-long photo triptych resembling a river of blood, Keane by two comparatively more inviting hanging sculptures that seem more abstract plays on Giger’s imagery. They’re the result of a yearslong dialogue between Shulan and the artists he shows revolving around Giger.

“My intent was to use it in a kind of appropriated way, in dialogue with other artists, and to make an implicit political commentary,” Shulan said.

Lomex’s booth is unusual for another reason: it is set in a space not typically occupied by fair exhibitors that happens to include a functioning bathroom. Inside, there are three silkscreen prints that depict science-fictional beings hooked up to machines.

“Those are works that were made by Bruno Bischofberger, who’s a legendary gallerist. When they were produced, they caused Giger to be thrown out of the art world,” Shulan said. “So they were the last works he made in the formal art world.”

Until Sunday, when the Independent Art Fair closes, you can view them while sitting on the toilet.