Gagosian, the world’s largest gallery, will now represent artist Ashley Bickerton, who first rose to prominence as part of the Neo-Geo movement in New York’s East Village scene of the 1980s. He will have his first exhibition with Gagosian at its New York space next year.

“When I look at his wall pieces from the ’80s, they look as fresh today as they did then,” said Kara Vander Weg, a senior director at Gagosian who edited a monograph on the artist that was published in 2015. “Nobody has made work like that since. He was really synthesizing a lot of influences—corporate America, Minimalism, Pop art—in that work and has continued to do so with other bodies of work that he has made since.” 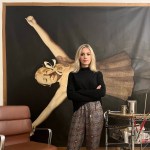 As part of this exclusive arrangement, Bickerton will leave his longtime gallery Lehmann Maupin, which first began showing him 2006 and gave him a solo show earlier this year.

“It was the most difficult decision I’ve ever made—that’s for certain,” Bickerton said of leaving Lehmann Maupin.

The gallery’s exhibitions devoted to Steven Parrino, an artist who rose in New York’s East Village at the same time as Bickerton and a close friend of the artist, helped seal the deal for Bickerton.

“Larry saw the whole thing—the dimension, shape of it and how it would play out,” Bickerton said. “It’s been impressive how he divined that and fleshed it out, and I feel that he’ll do something similar with me.”

Over the years, Bickerton’s art has been defined by a spirit that has been intentionally hard to pin down. “It’s ironic—if you put work from across my career together, it would look like a group show,” he said in a Zoom interview from his home in Bali. “But the fact is I don’t believe it’s changed at all. The internal motives have always been constant, and the stylistic drag that I put on is just that—it’s just stylistic show. I purposefully dive into stylistic manifestations that are antithetical to the one I did before.”

The works that became associated with the Neo-Geo (or Neo-Geometric Conceptualism) were primarily sculptural in form and commented on consumerism and industrialization, particularly in the U.S. They can partly be read as a response to decade’s excess. (They were labeled “commodity art” during the ’80s, though the term didn’t stick.) Bickerton developed own personal brand, SUSIE, whose logo he juxtaposed those of companies like Renault, Marlboro, Nike, and Motorola. He called these works self-portraits.

From there, after moving to Bali in 1993, he made a radical departure, painting portraits in vibrant colors, as a way to parody Western expectations of an artist having moved to Southeast Asia, like Gauguin before him. His work has since returned to the sly sculptural pieces for which he first became known.

“I’m much closer now to where I was in the ’80s,” he said. “That’s because I didn’t like how my career had been bifurcated by the viewership.”

His motivation has always been to address the contemporary moment. “I want to be able to address whatever the hell is going on in the world: a sour break-up, a beautiful vista, a tender moment, a yearning sentiment, or some political outrage sweeping the nation.”

Out of New York

Having been born in Barbados in 1959, when it was still a colony of the British Empire, and having grown up in various tropical locations, Bickerton relocated from New York to Bali almost 30 years ago, seeking a warmer climate. “When New York turned sour on me, as it does, I followed my inclinations elsewhere,” he said. “I just didn’t want to sit around New York like so many ghosts I saw at openings. It wasn’t for me, and I could barely take the New York winters when I was filled with optimism and things were going great.”

Another reason was that he felt his association with the East Village scene—especially his association with Koons and Halley—kept following him. “That was excruciating,” he said. “No, I wanted my own way. I didn’t want that to be my legacy. Now, it doesn’t bother me as much.”

Though Bickerton has never had a proper museum retrospective (anywhere in the world), he most recently had a survey of his work at artist Damien Hirst’s Newport Street Gallery in London in 2017. A related show at the Flag Art Foundation in New York took place later that year.

In an email, Hirst said that when he first saw Bickerton’s art in the ’80s, “it totally blew my mind. It inspired me and opened me up to what art could be, and how confrontational it could be both in terms of ideas and materials. Ashley’s works are of their time yet timeless, his questions and ideas stay with you and grow in the mind in ways that only great art does.”

Bickerton has continued to inspire a younger generation of artists, including Jordan Wolfson, who said in an email, “Ashley remains one of the most important artists of his generation and his work continues to influence both my generation and the generations above and below. His work has made a substantial and acute impact in its witnessing of the culture. … The power of an artist’s work to remain ever present if not futuristic is astonishing.”

Noting that both Hirst and Wolfson show with Gagosian, Vander Weg said, “What is so wonderful about Ashley’s work is that it bridges generations. It’s not speaking to just one generation of artists.”

With this new move to Gagosian, Bickerton said he hopes that his forthcoming show in 2023 will help “recontextualize” his art by presenting historical work alongside his more recent series as well as some very new pieces, which are very much still in progress. Bickerton said that his studio is currently stretching large-scale canvases.

During the pandemic, Bickerton was diagnosed with A.L.S. “So I’m fighting the battle of time, too,” he said. (He noted that his move to Gagosian is not related to his recent diagnosis, and would have happened anyway.)

Bickerton continued, “What I’ve noticed is that no matter what work you do, it will always be seen through the prism of your condition. My last show was naturally seen through the prism of my mortality—staring at the infinite. The work I’m doing now will probably be even more so. There’s something sort of ghostly about it. I have no problem talking about it, but I don’t want to be known or judged by this.”