The Los Angeles art dealer Douglas Chrismas has been ordered by a California court to repay $14.2 million amid an ongoing bankruptcy case, the Art Newspaper reports. The money allegedly came from art sales, and he had redirected the funds to his personal accounts.

Chrismas was renowned for giving major talents, including Ed Ruscha and Michael Heizer, a platform early on at his now defunct Ace Gallery. More recently, a slew of allegations of financial mismanagement overshadowedhis reputation. He was repeatedly sued by artists on his roster for withholding payments from sales and failing to return unsold artworks.

Ace Gallery filed for bankruptcy in 2013, but Chrismas continued to lead the business until 2016, when a court-ordered reorganization plan placed bankruptcy trustee and forensic accountant Sam Leslie in charge. (At the time, the gallery ran Beverly Hills and mid-Wilshire branches.) 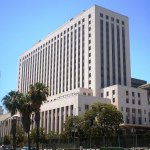 While sorting through the business’s financial transactions and inventory of artworks, Leslie discovered that between February 2013 and February 2016, Chrismas had diverted around $17 million from the Los Angeles operation to two New York-based shell companies. According to the report Leslie filed with the court in May 2016, Chrismas also had some 60 artworks that had not been accounted for in his bankruptcy trial in a private storage facility.

Last July, the disgraced dealer was arrested on charges of embezzlement by FBI agents in Los Angeles. The indictment accuses Chrismas of redirecting some $265,000 from the bankruptcy estate of Ace Gallery to a separate corporation that he owned. He pleaded not guilty to the charges and was released on bail. Meanwhile, Leslie had opened a civil suit against Chrismas over “these diversions of cash arising from sales of inventory,” Leslie’s attorney told the New York Times in 2021.

On May 4, the U.S. Central District Court of California ruled in favor of Leslie. The court cited the irrefutable evidence against Chrismas, who was ordered to pay $14.2 million in lieu of a trial. However, if convicted of all charges in his upcoming criminal case, he would face a maximum sentence of 15 years in federal prison.