Digital artist Beeple and Madonna have collaborated to produce three NFTs that depict the pop superstar as the mother of all creation.

The NFTs—entitled Mother of Nature, Mother of Evolution, and Mother of Technology—are all quite graphic, 3D-rendered videos of Madonna. In the first, she is giving birth to a tree in a lab setting; in the second, butterflies in a dystopic, crumbling city; and, in the third, mechanical centipedes in a lush garden. Her vagina is more finely rendered than her face or the rest of her body, which is almost comically distorted.

Beeple, a graphic designer based in North Carolina whose real name is Mike Winkelmann, is most famous for his Everydaysseries, a collection of digital drawings he has made daily since May 2007.The first 5,000 of those drawings were made into the famousEverydays: The First 5,000 DaysNFTthat realized $69.3 million at a Christie’s auction in 2021 and launched the unknown artist to international fame. 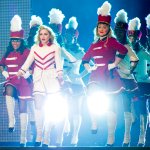 Madonna and Beeple Link Up for NFT Project, Barbara Kruger Creates 'Post-Roe' Response, and More: Morning Links for May 10, 2022

The three works will be auctioned on the NFT platform SuperRare on May 11, as part of a new partnership for Beeple, who has most often worked with OpenSea and Christie’s in the past. Proceeds will go to three different charities, The Voices of Children Foundation, a charity for women and children in Ukraine, The City of Joy, a leadership program for women of the Eastern Democratic Republic of the Congo, and Black Mama’s Bail Out, which uses funds to bail out Black women and caregivers from the carceral system.

“When Mike and I decided to collaborate on this project a year ago, I was excited to have the opportunity to share my vision of the world as a mother and an artist with Mike’s own unique point of view,” said Madonna in a press release. “I wanted to investigate the concept of creation, not only the way a child enters the world through a woman’s vagina, but also the way an artist gives birth to creativity.”