A Picasso that was lost years ago may have been spotted in the home of Imelda Marcos, the former First Lady of the Philippines who has been widely accused of corruption.

Marcos’s son, Ferdinand “Bongbong” Marcos Jr., is the presumptive president-elect of the Philippines. Following a landslide victory on May 9, Marcos Jr.’s win has been met with growing concern in the Philippines, where his family previously plundered billions of pesos under his father’s dictatorship.

After his win, the Marcos family released footage of him visiting Imelda. Hung on the wall in her home are multiple artworks, including what appears to be Picasso’s Femme Couchée VI (Reclining Woman VI)⁠—or possibly a replica of it⁠—placed above the sofa. 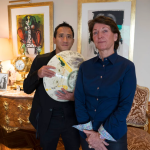 Picasso Heirs to Offer NFTs of the Artist's Ceramic Work

One of eight paintings targeted for seizure by anti-corruption authorities in 2014, it remains unclear whether the painting is authentic.

Some have suggested that the painting is indeed real, including Andres Bautista, a former chairperson at the Presidential Commission on Good Government (PCGG), which was set up to recover funds gained by the Marcoses by corrupt means. In an interview with Rappler, Bautista claimed that the Picasso painting that the PCGG had seized was “a fake, it was a tarpaulin so it’s still with them.”

During his 20-year reign, Ferdinand Marcos Sr. plundered as much as $10 billion. He was deposed in 1986, causing economic instability that is still impacting the Philippines today.

When Marcos Sr. was in power, the family funneled funds into overseas bank accounts and real estate holdings, and purchased art, jewelry, and designer clothes. There are concerns that the family will now use Marcos Jr.’s new position to cease the recovery of what was stolen.

Recent reports have shown that the PCGG has recovered roughly $5 billion from the Marcoses. Some $2.4 billion is pending in litigation and even more remains missing. As President, Marcos Jr. would have the authority to appoint the commissioners of the PCGG, which could greatly alter the return of any remaining funds.

Currently, Imelda is appealing a 2018 criminal conviction on seven corruption charges, while the family continues to face dozens of unresolved cases regarding their wealth.