The Guggenheim’s high-profile Abu Dhabi outpost, nearly 20 years in the making, has named a new project director to lead its final leg of construction. Stephanie Rosenthal will oversee the museum’s long-awaited opening on Saadiyat Island, home to cultural institutions including the Louvre Abu Dhabi.

Rosenthal has served as the director of Gropius Bau in Berlin since 2018, following 10 years as the chief curator at the Hayward Gallery in London. The Munich native was the first woman to lead Gropius Bau and is credited with reinvigorating its curatorial program with a focus on diverse contemporary artists. She also introduced the gallery’s first artist-in-residence program; Wu Tsang, Otobong Nkanga, and Zheng Bo were among the first artists to participate. 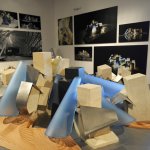 She will officially begin her tenure in the Emirati capital in September and will jointly direct the institution ahead of its scheduled opening in 2025.

“My goal is to create an inclusive institution that is truly rooted in the region and can become one of the most important institutions worldwide,” Rosenthal said in a statement. “I have always been committed to the vision of artists and supported their artistic creative process.”

Rosenthal will assume her position amid a period of political and social transition caused by the recent death of the federation’s ruler, Sheikh Khalifa bin Zayed Al Nahyan. Khalifa, the president of the U.A.E. since 2004, together with his brother Sheikh Mohammed bin Zayed, fueled Abu Dhabi’s economic growth and pursuit of international cultural cachet. The government’s cultural tourism authority is centrally involved in the developments on Saadiyat Island.

The Guggenheim Abu Dhabi is one of the highest-profile projects on the waterfront complex. When it is completed, it will be home to the Louvre Abu Dhabi, built by renowned French architect Jean Nouvel; the Zayed National Museum, designed by the British architectural firm Foster + Partners; and the Abu Dhabi Performing Arts Center designed by Zaha Hadid. The government has estimated that the complex will see 7.9 million tourists annually.

As head of the Guggenheim’s project team, Rosenthal will work closely with Maisa Al Qassimi, the museum’s acting project director for the Tourism & Culture Authority.