Cambodia is urging U.K. officials to investigate British institutions for possibly harboring stolen artifacts obtained by Douglas Latchford, the late British dealer who has been accused of looting Cambodian or Khmer artifacts.

Representatives for the institutions both told the BBC that they were researching the artifacts. The British Museum spokesperson said that it looks for any “possible ethical or legal issues” when acquiring works. 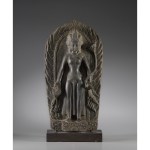 Until recently, most of the focus on Latchford has been his connections to United States museums, some of which hold artifacts believed to have passed through his hands.

Latchford, who died in 2020, amassed a significant collection of Cambodian antiquities worth millions of dollars. Many of the objects that he owned may have been taken during the mid- to late ’70s, during a period when the Khmer Rouge held power in Cambodia, resulting in bloodshed and turmoil.

“This was a time of conflict. The whole world knew it,” Brad Gordon, a lawyer representing the Cambodian Ministry of Culture, told the BBC. “Large museums like the British Museum or the V&A, they shouldn’t have accepted these pieces.”

In 2019, Latchford was indicted in New York for trafficking in antiquities from Southeast Asia that came with false provenances. Prior to the indictment, he had denied any allegations of wrongdoing.

The Pandora Papers, a leaked trove of documents containing millions of filings related to the business dealings of the ultra-wealthy, revealed that Latchford was able to conceal information about the objects he acquired using offshore trusts.

Following Latchford’s death, his daughter, Nawapan Kriangsak, said in 2021 that she would return 125 works from his collection that have been valued at $50 million. They are expected to figure in a new museum that will be built in Phnom Penh.

Institutions such as the Metropolitan Museum of Art and the Cleveland Museum of Art are thought to hold works that Latchford had either helped bring to the U.S. or had himself donated. This past November, working with U.S. investigators undertaking a larger inquiry into Latchford’s dealings, the Denver Art Museum deaccessioned four artifacts.

Correction, 5/16/22, 11 a.m.: This article has been updated to more accurately reflect the nature in which the Denver Art Museum gave up artifacts that allegedly passed through Latchford’s hands.