At the most important art fairs anywhere in the world, you can expect to find dozens, if not hundreds, of booths that feature works by today’s hottest artists. But at a new fair coming to New York this September, almost everything on view will be by artists who were active in the 20th century.

That fair, titled Independent 20th Century, will convene around 30 galleries from around the world at the Battery Maritime Building in Lower Manhattan. It will be the second fair currently run by Independent, which already facilitates another one in the spring focused on contemporary art. The first edition is set to take place from September 8 to 11, and will run concurrently with the Armory Show at the Javits Center. 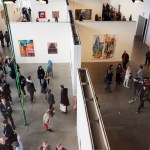 Techno, Ostrich Eggs, and Icy Winds: Independent Art Fair Gets Off to a Spirited Start

Well, Aisle Be Damned! On Its 10th Anniversary, the Independent Fair Is Still Going Strong

Though other New York fairs, like TEFAF and the ADAA Art Show, often include presentations of well-known 20th-century artists, this new fair will function somewhat differently. Not only will the entire fair will be devoted to this period of art history, Independent 20th Century also has the stated aim of revising the canon to create a more diverse picture of art history.

Independent’s director Elizabeth Dee, who organized this fair with Matthew Higgs, the director of the alternative space White Columns, said that she was seeking to mirror some of what is taking place at galleries she is interested in.

“Over the years, there has been a shift, with next-generation dealers showing a more diverse group of artists and territories, geographically, socially, politically,” she said in an interview. “They are looking forward and looking back, saying, ‘We need to have a canon that looks like our program.’”

The fair also taps a trend being seen at biennials across the world, which are increasingly relying on dead artists to explore aesthetic turns taking place right now.

“The key curatorial conversation in the 21st century has been the recovery of earlier art historical voices,” said Higgs, who also acts as an adviser to Independent’s spring edition. “There’s been this persistent interest in the past and its relationship to the present.”

At the current Venice Biennale, for example, curator Cecilia Alemani explored a reemergence of Surrealism by tracing the movement’s initial rise in a series of historical sections, exclusively relying on women to do so.

Many of the artists Alemani focused on are figures who, because of their gender identity, their race, their sexuality, their location, or any mix of these factors, have not yet made it into the canon, as is often the case with many dead artists who appear in biennials. Because of this, their work is generally not highly valued within the market.

There have, however, been some attempts to lend these under-recognized artists greater clout by raising their prices on the auction block. At a Christie’s 20th-century art sale last week, new auction records were set for artists like Ernie Barnes, Grace Hartigan, and Howardena Pindell, none of whom have enjoyed the same level of attention as Andy Warhol, Willem de Kooning, and others whose work typically sells for top dollar.

Dee said she conceived Independent 20th Century as a fair where artists who are “emerging in market potential” are given high-quality surveys that are of value to curators as well as buyers. Not everything will be for sale, however—the fair will also include some museum loans that will help galleries provide the fullest picture of the artists they showcase.

“It will be a place where people do research,” Dee continued. “There is a reason why everything is there, and it’s because it’s right for this moment.”