Kim Kardashian turned heads earlier this month when she appeared at the Met Gala, the annual celebrity event that raises funds for the Metropolitan Museum of Art’s Costume Institute, wearing a historic gown custom made for Marilyn Monroe.

It was the dress that Monroe wore at Madison Square Garden on May 19, 1962, when she famously sang “Happy Birthday” to President John F. Kennedy. Monroe died of an overdose later that year.

The decision by Kardashian, and the dress’s owners, Ripley Entertainment, to bring the dress to the Gala immediately drew criticism from curators and historians. Now, the International Council of Museums (ICOM) has joined the chorus criticizing the reality television mogul. 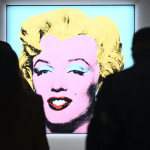 Warhol's Bullet-Marred Portrait of Marilyn Monroe Sells for $195 M., a Record for the Pop Artist

“Historic garments should not be worn by anybody, public or private figures,” ICOM said in a statement on Thursday.

Citing its museum code of ethics and conservation guidelines, the organization said that historical garments should be handled as little as possible to preserve them. ICOM listed the many threats to an archival garment’s conditions that should be avoided—all of which were presumably introduced to the Monroe dress at the May event—including fragrance, makeup, jewelry, stage lighting, humidity, and photographic flashes.

ICOM is far from the only one to condemn the decision. Sarah Scaturro, a former head of conservation at the Costume Institute and current chief conservator of the Cleveland Museum of Art, worried that the Monroe dress decision could have copycats.

“In the ’80s, a bunch of costume professionals came together to state a resolution that historic costumes should not be worn,” Scaturro told theLos Angeles Times. “So my worry is that colleagues in historic costume collections are now going to be pressured by important people to let them wear garments.”

Meanwhile, Madelief Hohé, a Dutch fashion curator said bluntly in an Instagram post that “wearing historic garments is unethical,” adding that its standard practice to refuse loans of archival garments even to the likes of figureheads like Anna Wintour, calling the move, “an insane assault on our profession.”

But the ire goes beyond preservation. Some have argued that the white dress was so specific to Monroe’s own body and the cultural moment in which it was first donned, that it should not ever have been reworn.

French designer Jean Louis, who produced the dress, dyed the fabric in a nude color to match the starlet’s skin tone and had it sewn onto her naked body before she took the stage to serenade John F. Kennedy in 1962 for the president’s birthday. The point of the dress was to be barely there—coming as close to the illusion of nudity as possible, a challenge at a time when films and television were highly censored. The garment’s now defunct fabric, soufflé silk, if damaged, would be irreparable.

“Monroe was doing what the best fashion does—dialogue with history while elevating it,” said curator Chaédria LaBouvier in a lengthy post-Gala Instagram screed tying Kardashian’s decision to celebrity culture and abortion rights.

“The Met Gala is, in this decline and end of empire, a true reflection of the incuriosity which governs our imaginations,” Labouvier said, criticizing the museum for its role in promoting what she sees as a transgression against a cultural artifact that, on its own, can tell us a lot about censorship, bodily autonomy, and racial politics.

Labouvier continued, saying the whole spectacle revealed a “museum failing in this ethical responsibility to safeguard a garment which is irreplaceable,” an artifact, she adds, that represents far more than Monroe’s sex appeal but also, “the formation and ideation of (White) American ideals.”

The privately owned for-profit Ripley Entertainment bought the dress in 2016 at an auction by Julien’s Auctions, for $4.3 million. At the time, there was little reaction from historians about whether or not the archival piece was at risk after the sale.

Despite the fact that the owner isn’t obligated to abide by the standards of care imposed on museums, ICOM said that “the heritage must be understood as belonging to humanity, regardless of which institution has custody of the property.”

The Hollywood Reporterhas the play-by-play on how the dress negotiations played out between Julien’s, Ripley Entertainment, and Kardashian.

Adding to the discordant tone of the Gala, whose theme was “Gilded Glamour,” Kardashian’s entrance to the red carpet photo-op came as news broke that a leaked Supreme Court draft opinion published by PoliticoMonday revealed that the court intended to overturn the 1973Roe v. Wadedecision that established a woman’s constitutional right to abortion.

Meanwhile, on the red carpet, Kardashian said she forced herself to lose 16 pounds in weeks to fit the dress, which seemed to confirm conservationists’ fears about how a new wearer might affect the integrity of the dress.

“They are artifacts of the material culture of [their] time,” ICOM said of the Monroe gown, and others like it, “and they must be kept preserved for future generations.”