If much of Frieze New York is given over to blue-chip businesses, the “Frame” section for younger galleries has a much different vibe. Find presentations by galleries like Dastan, Hannah Hoffman, Lomex, and others in this section of the fair, reserved for galleries that have been in operation for 10 years or less. In “Frame,” edgy work shines, and it can result in artists getting recognition early on.

“I love what ‘Frame’ can do for young artists,” said Sophie Mörner, founder and director of New York’s Company Gallery, and a member of the committee that selects such galleries for Frieze. “This is why we thought it was important to showcase just one artist.” On view at Company’s booth were two large, eye-catching sculptures by Swedish-born Cajsa von Zeipel. 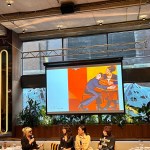 But Frame is an opportunity to celebrate an artist no matter their age. Lubov Gallery, of New York, chose to focus on works by Marsha Pels, a 72-year-old artist who makes large, visceral sculptures.

When Pels’s work Fallout Necklace (2018) went on view as the sole piece in her solo showSolaceat Lubov in 2020, it had been eight years since she had last exhibited. The sculpture, a giant aluminum necklace studded with portraits of world leaders in lieu of gems, filled an entire room at Lubov. Since the success of that show, interest in Pels has resurged.

“Before Solace, it had been so long since she had exhibited, so I wanted to keep the momentum going,” said Lubov’s owner and director Francisco Correa Cordero. Lubov’s booth this year features a trio of works that span a 15-year period. Correa Cordero described the booth as a “mini-retrospective” which not only takes a long view of her career but of her life story.

Three works from her “Dead Mother, Dead Cowboy” series, made between 2006 and 2008, chronicle a traumatic time in the artist’s life when her mother died. Shortly afterward, Pels’s boyfriend left her.

Pels will often use clothing as the focus of her works. One of the works from the series, Ecorche, pieces together her mother’s fur coats, on the back of which ten pairs of cast gloves are aligned like a strange, long rib cage, hinting at her mother’s lost touch.

The ghost of her boyfriend, too, lives on in objects he left behind, namely a motorcycle, combat boots, and a pair of gloves. For Dead Cowboy, Pels once again refashions clothing to become not only an accessory but a replacement body. A rib cage is added around the frame of the motorcycle, and a spinal column sprouts from the handle bars, which then bear a grinning skull, wrapped in a scarf suspended in an eternal wind.

The paradox of Pels’s memory of her ex is immortalized—he is always gone, always leaving, yet the view of him never blinks off into the distance. Instead, he is as present and solid as the rubber, resin, and steel from which she fashions his totem.