What if you didn’t have to wait for European and American museums to repatriate African artifacts? Mulling this question, Chidi Nwaubani, the founder of NFT project Looty, decided to take matters into his own hands with his project Looty, which bills itself as a “digital restitution project.”

“Our ‘Looters’ [anonymous team members] go to the museums (physically) and take back the artworks (digitally),” a description on its website reads. To do so, the people behind the project take scans of works and create digital renderings that are then made into NFTs.

The Benin Bronzes, a group of thousands of artifacts looted from the Kingdom of Benin in 1897 by British troops, have been the subject of repatriations at museums across Europe and the U.S. lately. Six NFTs based on some of them are available for sale through Looty at a starting price of 0.99 ETH ($1,936). 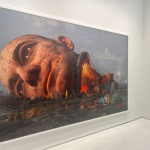 Released on May 13, none of the Benin Bronze NFTs have sold yet. The plan is to use 20 percent of the funds from the proceeds to provide a young African artist with a grant.

Like so many NFT projects, especially those with a charitable component, the conceptual strength of the work is one that is activated through success on the market. But as the pieces languish unsold, the promise of restitution and reparations falls a bit flat.

Looty isn’t the first NFT project to try to return funds to Africans. HB Antwerp, a Belgian diamond company, started a metaverse company called Signum that released a series of NFTs. Signum announced earlier in may that some of the profits from that project will be used to raise funds for mining communities in Botswana.

Described as “an innovative rough diamond brand,” the company sold out an NFT project called cryptobunnies, each styled to look like a rough diamond, for $10,000 dollars each. A convoluted reward system offered holders “metadiamonds” and other perks. An unknown portion of the royalties are to be routed to a women’s leadership group in Botswana.

“At the moment diamond mining areas see a lot of their wealth flow abroad as diamonds are not processed where they are found,” said Signum cofounder Shai de-Toledo in a press release. “Investment in education and local production of diamonds increases the amount of money going to the mining communities. Whether in physical diamonds or NFTs, the Signum ethos is to make the production completely accountable and ensure that everyone involved in the supply chain can be properly rewarded.”

Ultimately, a small NFT project overseen by a diamond startup may not be an even response to the realities of how the mining industry impacts certain communities in Botswana. By contrast, even if may in the end be slightly ineffectual, the Looty NFT project is a project bent on offering Africans a much-needed form of catharsis.