Venus Over Manhattan, a blue-chip New York gallery that has helped boost under-recognized artists like Joan Brown and Joseph E. Yoakum, has added the sculptor Sally Saul to its roster. The gallery has plans to offer the 78-year-old sculptor a solo show in 2023, her third one ever in New York.

Saul, who is married to the painter Peter Saul, another artist on the Venus Over Manhattan roster, makes delectable clay sculptures that feature tiny creatures who inhabit strange worlds. She had been formerly represented by New York’s Rachel Uffner Gallery, which, because of Venus Over Manhattan’s exclusive deal, no longer shows her.

Although Saul has been working for years, having been featured in her first group show back in 1989, it was not until 2017 that she had a solo show in New York. When that show opened at Rachel Uffner Gallery in 2017, it received acclaim from critics such as John Yau, who wrote in Hyperallergic that Saul’s works are “funny, sweet, and tender—states we are not likely to encounter in art or even in life.” A solo show at the influential Almine Rech gallery’s Paris location came in 2020. 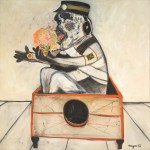 More Than a 'Holocaust Artist': Miami Show Positions Maryan as an Unknown Giant of the Postwar Era

“I think I’m one of her biggest collectors, so it’s always good to share with others what you love yourself,” said Adam Lindemann, the founder of Venus Over Manhattan, in a phone interview.

The gallery also recently inked a representation deal with the estate of Maryan, an artist whose work was recently the subject of a retrospective at the Museum of Contemporary Art North Miami. In his work, Maryan, who died in 1977, offered up surreal visions of power figures that sometimes doubled as a means of working through his experience being interned at a concentration camp during World War II.