New York’s Studio Museum in Harlem has hired Amber Esseiva to be its first-ever curator-at-large. Esseiva is currently a curator at the Institute of Contemporary Art at Virginia Commonwealth University in Richmond.

The new position comes as the Studio Museum is in the process of building a David Adjaye–designed expansion that will add 11,000 square feet of exhibition space, as well as a roof terrace, new areas for educational programming, and more offices. That expansion is set to open in 2024.

“The Studio Museum’s legacy is one that I have always carried with me in my mind and heart and so to have the opportunity to apply my admiration toward the planning of the Museum’s new building is tremendous,” Esseiva said in a statement. 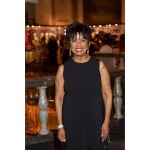 At the ICA VCU, Esseiva has demonstrated an ability to spot rising talents early in their careers.

Kandis Williams, who is in the current Whitney Biennial and was in the 2021 edition of the Hammer Museum’s Made in L.A. biennial, had her first museum solo show at the ICA VCU with Esseiva curating. The Esseiva-curated presentations of works by Dineo Seshee Bopape and Jeremy Toussaint-Baptiste at the ICA VCU were also among those artists’ first U.S. solo shows.

A similar ethos has imbued the offerings put on by the Studio Museum, which is dedicated to artists of African descent. Since its founding in 1968, it has gained a reputation for supporting Black artists before the country’s biggest institutions and galleries take notice.

Thelma Golden, the Studio Museum’s director, said in a statement, “Over her notable career, Amber has worked closely with artists across all disciplines, demonstrated a commitment to cross-departmental collaboration, developed large-scale commissions, and led efforts in advancing and applying ethical institutional practices. We are delighted to have her as a partner in this exciting and transformative moment of growth.”