The photographer Gordon Parks worked so prolifically that it is hard to imagine one artist producing so many high-quality works. “When we talk about Gordon Parks, it’s as if we’re talking about half a dozen different people,” Laurene Powell Jobs, the billionaire who runs the influential philanthropic organization the Emerson Collective, told the 500 attendees at a gala hosted in New York by the Gordon Parks Foundation last week.

Later on, she added, “He showed us the chasm between the principles that we were told our country is based on and the reality that we have failed to live up to to this day. His pictures demand that we look twice.” 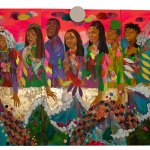 New Exhibition Focusing on 'Legacies of the Great Migration' Looks at Artists' Personal Connections to a Chapter of U.S. History

Many of the people on hand that night at Cipriani had gazed at some of Parks’s pictures far more than two times. The filmmaker Spike Lee, one of the artist’s most vocal admirers, was there, along with his wife, Tonya Lewis, as was the musician Questlove, record producer and ARTnews Top 200 collector Swizz Beatz, art historian Sarah Lewis, journalist Jelani Cobb, newscaster Anderson Cooper, and many others. Lee was being honored that night alongside Jobs, Ford Foundation president Darren Walker, and artist Mark Bradford.

For many of these figures, Parks has been a touchstone because he produced some of the most important images of Black Americans ever made. Known primarily as a photojournalist, Parks also made films and music, all in the effort to create lush, stylish views of people who looked like him and the forms of oppression they faced. As Foundation executive director Peter Kunhardt Jr. put it in a speech during the gala, “His camera was his weapon of choice to fight racism.”

The Parks Foundation has kept busy trying to take in all his work, which runs the gamut from fashion photography to the 1971 Blaxploitation film Shaft. “For the last decade, we’ve focused on understanding him as a photographer,” Kunhardt told ARTnews.

The Foundation—established in 2006 by Kunhardt’s grandfather, a Lifemagazine editor, and Parks himself—recently oversaw the production of a publication on 100 of Parks’s previously unseen photos of Pittsburgh grease plant workers from the 1940s; it coincides with an exhibition opened last week at the Carnegie Museum of Art. The Foundation also aided in Howard University’s recent acquisition of 252 of Parks’s works.

In tribute to a bit of Parks-related history, the Foundation gala honored Cora Taylor, the 84-year-old-woman who appeared in a shot taken by Parks in 1959 while he was on assignment in Mobile, Alabama. She was among the few passersby Parks captured at a segregated drinking fountain. Until 2014, however, Taylor went unidentified, as have many of Parks’s subjects. The recognition“brought me alive again,” Taylor told ARTnews.

In addition to upholding Parks’s work, the foundation has a future-oriented role in supporting today’s budding artists and scholars, some of whom attended the gala.

Accepting an annual writing fellowship was scholar and curator Nicole Fleetwood, whose 2020 book,Marking Time: Art in the Age of Mass Incarceration, which examines the carceral system and artists working from inside it, has gained acclaim. Possessing an “understanding of the power of image and text,” in a fashion that outpaced many of their peers, was one strength Fleetwood said defined Parks and his late wife, the editor Genevieve Young. “The importance of documenting Black life,” Fleetwood said, was Parks’s biggest impact on her.

Artist Bisa Butler and photographer Andre D. Wagner, both of whom also received $25,000 fellowships from the Parks Foundation, made remarks during the gala as well.

In one of the night’s few somber moments, Mark Bradford took the stage to deliver unscripted remarks on the trials that artists often undergo. Bradford has gained widespread attention for his large-scale abstract paintings and installations dealing with forms of oppression, from the Confederacy to police violence.

“I look out and see so many artists, people that have mined the territory for years,” he said, referring to the proverbial terrain in which artists labor to source ideas that inform their work. “A lot of times artists walk those low points by themselves—those are the moments we need you. We walk alone in that valley.”

Parks’s work can act as a guide, Bradford told ARTnews before his speech. “I would look at Gordon Parks’s work when I wanted to see a real snapshot of America for the last 30 or 40 years,” he said. “He was a beacon.”