Samella Lewis, an artist, curator, and historian whose writings shaped African American art history, has died at 98. She died on Friday, according to the Museum of African American Art in Los Angeles, which Lewis founded.

In her art and her writing, Lewis sought to preserve aspects of the African American experience that had largely been ignored by the biggest institutions in the United States. Her work has inspired legions of artists, critics, curators, and art historians who came after her, and has been considered crucial for the way Black art is studied in the country today.

Lewis’s books, most notably Black Artists on Art (1969) and Art: African American (1978), are believed to have been among the first surveys of their kind. The former was put out by a publishing house that Lewis herself set up, Contemporary Crafts, because many of the biggest art-book editors did not believe it would find an audience, she once recalled. 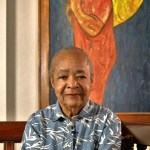 If Black Artists on Art, with its 150 interviews, was already ambitious, given the lack of resources Lewis had on hand, Art: African Americanwas an epic endeavor. It marked an attempt to map centuries’ worth of art-making, beginning with African American craft traditions from the 17th century and culminating in the work of the book’s then-present. Jacob Lawrence, the artist best known for a cycle of paintings known as “The Migration Series,” wrote that book’s foreword.

In her own art, Lewis continued the project she had begun in her writing, producing images that were reflections on the African American experience of the past and the present.

“Art is a language like poetry, evoking sensitivities and memories,” she told the Los Angeles Times in 1995.

Curator Naima J. Keith once described Lewis’s art as “pictorial manifestations of the age of civil rights and black liberation.”

In one of her most famous works, the 1968 linocut print Field, a Black worker is shown in a field before a towering sun. The figure holds one fist up in the air, evoking a symbol used in Black Power protests by activists. Although that symbol is rooted in recent history, Lewis evokes the times of slavery through the work’s milieu.

Her 1969 painting Royal Sacrifice, another well-known work that appeared on the cover of Art: African American, evinces a more ambiguous mood. In it, a mother stands behind a child. In the background hovers a grim reaper. The tile alludes to longstanding traditions, but the mother’s Afro hairstyle is contemporary.

“The young mother her son by his shoulders, trying to keep him from his fate, yet her expression is one of resignation,” art historian Kellie Jones writes in her 2017 book South of Pico: African American Artists in Los Angeles in the 1960s and 1970s. “This sentiment, of course, was widespread in the 1960s and 1970s, when young black people were being killed in their quest for social freedoms.”

Because Lewis’s prints were reproduced frequently in literature, they have been seen widely. And yet, Lewis’s art is not as commonly exhibited in institutions as that of her colleagues.

Lewis’s work is owned by museums such as the Museum of Modern Art, the Metropolitan Museum of Art, the Philadelphia Museum of Art, and the Ruth Chandler Williams Gallery at Scripps College, where Lewis became the first tenured Black professor in 1970. Jones featured Lewis’s work in the landmark show “Now Dig This! Art and Black Los Angeles, 1960–1980,” which first appeared at the Hammer Museum in 2011.

‘Who They Are and Where They Are’

Samella Sanders Lewis was born in New Orleans on February 27, 1924. She had never intended to become an artist when she went to Dillard University, a historically Black university in the Louisiana city, but she found herself pushed toward it when she took classes with the sculptor Elizabeth Catlett and her husband, the artist Charles White.

Lewis often cited Catlett as one of her primary inspirations, since she brought figures like the singer Paul Robeson into her classes and since she imparted so much wisdom early on.

“One of the important things I learned in Elizabeth’s class is that you don’t paint people without knowing something about them and who they are and where they are,” Lewis said in a 1992 oral history for the University of California, Los Angeles.

After two years at Dillard University, Lewis went to the Hampton Institute in Virginia, where she continued to study with Catlett. She went on to get a PhD in art history from Ohio State University and to teach at two more historically Black colleges and universities, Morgan State University in Baltimore and the Florida Agricultural & Medical University in Tallahassee. At the latter university, she organized the first-ever conference for African American artists.

In her art-historical studies, Lewis often focused on Chinese art, which she viewed as being not entirely siloed from African art, given that Africans can be spotted in historical works. She spent three years in Taiwan on a Fulbright scholarship, later returning to the U.S. as a postdoctoral fellow at the University of South California, Los Angeles.

For a brief period starting in 1968, Lewis worked at the Los Angeles County Museum of Art, where she became education coordinator amid a push by activist groups to have better Black representation within U.S. institutions. Yet Lewis resigned two years later when it became apparent that LACMA would not change as fast as some had hoped.

The rest of Lewis’s career took place outside institutions as big as LACMA, which have been historically slow to acknowledge her outsized impact on Black artists and historians. One of her first solo shows was held in 1969 at L.A.’s Brockman Gallery, which some have considered to be the first Black gallery in the U.S., and a number of Lewis’s initiatives during the late ’60s onward were done through publishing houses, museums, and galleries that she herself started.

Among those initiatives was the journal Black Art: An International Quarterly, which she began with Val Spaulding and Jan Jemison in 1975. (It is still in print under the name the International Review of African American Art.) Much of the funding and support came from the local Black community, with Brockman Gallery advertising its shows in its pages and artist Camille Billops helping to raise money for it.

Meanwhile, Black Artists on Art, the 1969 book, was also complemented by a series of films featuring interviews with Lewis, John Outterbridge, and Bernie Casey that were distributed by Lewis’s publishing house, Contemporary Crafts. And with Casey, Lewis started Multi-Cul, a commercial gallery that gave Betye Saar one of her first shows. All the while, Lewis was teaching at Scripps College.

“They probably have the best collection of any African American museum, permanent collection, in this country,” Lewis said in her UCLA oral history.

Lewis continued to remain active in the decades after, publishing a Catlett monograph in 1984 and a Richmond Barthé book in 2009.

During the past few decades, Lewis has been recognized by various institutions, including UNICEF, which gave her a visual arts award in 1995. In 2021, the College Art Association, where Lewis had once been on the publications committee, gave her its esteemed lifetime achievement award. That same year, her work was featured in the LACMA survey “Black American Portraits.”

“Looking back, I’m not proud of anything I did, really,” Lewis wrote in the catalogue for the 2017 show “Soul of a Nation: Art in the Age of Black Power.” “I don’t get proud. I just do what I have to do, and it happens, and then I go to the next thing. Compiling those books about Black artists and writing the art history of African American art wasn’t done for career objectives—it was a necessity.”