A team of archaeologists has discovered 134 previously unknown settlements of peoples who lived along Hadrian’s Wall, a defensive fortification in England that dates back to ancient Roman times.

Hadrian’s Wall was built as the Roman Empire pushed into Britain. Running from coast to coast, the wall marked the border between the conquered South and the unconquered North. A team of archaeologists have been studying the region above the Wall to better understand this borderland that was object of so much political, social, and military focus.

This team of researchers, from Edinburgh University, published their findings in the archaeology journal Antiquities. Their paper, authored by ManuelFernández-Götz and others, argued that it was important to understand how people lived before and during contact with the Romans. 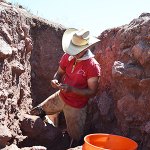 Oldest Prehistoric Mine in America Was Used for Extracting Pigments, Archaeologists Find

Archaeologists Have Unearthed the 4,300-Year-Old Tomb of an Ancient Egyptian Dignitary

“Several issues, however, have traditionally hindered our understanding of this northern frontier,” the paper’s authors wrote, citing the “academic divides between prehistoric and Roman archaeology” as a key problem.

“Many analyses have adopted a predominantly Roman perspective, focusing primarily on Hadrian’s Wall, the Antonine Wall and the hundreds of Roman forts and temporary camps known in northern Britain,” the paper goes on to say.

By focusing on the grey area between prehistoric and Roman archaeology in Northern Britain, the researchers were able to find a wealth of settlements that had gone previously unfound.

New developments in technology also helped. Through a process known as Lidar, which stands for Light Detection and Ranging, lasers were used to comb the surface of Northern Britain for irregularities that would suggest the presence of ancient settlements.

Now that these settlements have been found, the team will focus on settlements along Roman roads, the territory above and below the Antonine Wall, and Hadrian’s Wall in a series of studies. The hope is that these new studies will shed light on how socioeconomic factors caused these settlements changed over time.