A network of hidden tunnels was discovered by a team of archaeologists beneath the 3,000-year-old Chavín de Huántar temple complex in the Peruvian Andes. The tunnels contain earlier forms of construction made by the Indigenous Chavín people that have not previously been observed.

The pre-Inca site was constructed by the Chavín people, originally from the Peruvian highlands, who first appeared in the Mosna Valley around 900 B.C.E. and remained until roughly 250 B.C.E. Across the Ancash region, the complex once operated as a major religious and administrative hub.

The Chavín de Huántar temple complex has been a UNESCO World Heritage Site since 1985. 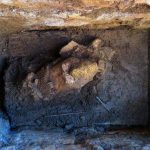 In 2019, archaeologists from the the Chavín de Huántar Archaeological Research and Conservation Program at Stanford University in California began exploring these passages through a small duct with a robotic camera. Using this technology, they found a gallery and chamber with an object in the center.

Studies were delayed, however, as a result of the pandemic. It wasn’t until last month that archaeologists could explore the gallery and a system of 35 interconnecting tunnels. According to archaeologist John Rick, who worked on the excavation team, the tunnels may have been built before the temple’s main galleries.

“It’s a passageway, but it’s very different. It’s a different form of construction,” describes Rick in a video for Reuters. “It has features from earlier periods that we’ve never seen in passageways.”

The passages would have been constructed between 1,200–200 B.C.E. at 3,200 meters above sea level in the foothills of the Andes.

Additionally, the object seen in the 2019 survey was discovered to be a stone bowl with a three-dimensional carving of a condor head projecting from its side. The bowl and galleries would have been used for ceremonial purposes.