Fayez S. Sarofim, the Egyptian-born, Houston-based financier and mega-collector who became known for his investment savvy, has died at the age of 93. He died at his Houston residence on May 28, a spokesperson for the family confirmed to theHouston Chronicle.

Born in Cairo in 1929, Sarofim was one of three children. His father was a prominent pharmaceuticals and agricultural products distributor. After attending a boarding school in Cairo, Sarofim came to the U.S. in 1946 to study food technology at the University of California at Berkeley, where he graduated in 1949. Two years later, he completed an M.B.A. from the Harvard Business School. 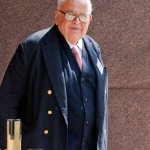 Following business school and a stint at a Houston-based cotton processor, Sarofim founded his namesake financial management firm in 1958 at the age of 30. He gained a reputation for his investment strategies and a staunch belief in American entrepreneurship. Eventually earning the moniker “The Sphinx,” he wasknown for acquiring and patiently holding onto lucrative stocks such as Exxon Corp. (now Exxon Mobil Corp.), Coca-Cola Co., Microsoft, and Intel, once remarking that, “Nervous energy is a great destroyer of wealth.”

His company would go on to become one of the largest investment advisors in the American Southwest, managing funds for major Texas public and private sector organizations like Rice University Endowment, The Brown Foundation, Inc., the Cullen Foundation, and Ford Motor Company.

His fortune grew even more as part of a deal led by investor Richard Kinder, who organized the purchase of a Houston-based pipeline and energy company in 2006 for $22 billion. Between 1999 and 2020, he served on Kinder Morgan’s board of directors.

He was married three times, first to Louisa Stude Sarofim, the Texas heiress of the Brown and Root fortune, whom he divorced in 1989 after a 10-year saga that resulted in what was then the largest divorce settlement in the state’s history. He is survived by his third wife, Susan Krohn.

The Museum of Fine Arts, Houston hosted an exhibition of his collection last year. Starting in 1970, Sarofim donated to the MFA, contributing a large portion of the museum’s endowment over the decades. He put $70 million toward its recent expansion.

“It is difficult to overstate the impact of Fayez Sarofim on the city of Houston and its institutions over his long life,” said the museum’s director, Gary Tinterow, in a statement to ARTnews. “Like so many who shaped this city, he was born elsewhere but adopted his new home with a distinctive fervor and loyalty. He ensured our stability and enabled our growth.”