Most New York gallerists who’ve opened spaces in the Hamptons got their start in the city and built up a network of artists and collectors before venturing out east. Dealer Harper Levine did the reverse. He started his gallery in East Hampton in 1997, tapping a rich community that would launch him from a rare bookseller to an established gallerist. Now, he has five spaces under his auspices, with three of them located in Manhattan.

This past weekend, Levine celebrated a major milestone, opening “25 Years,” a show in East Hampton that toasted the gallery’s 25th anniversary.

Dealer Jack Hanley and artist Cindy Sherman were among those who came this past Saturday to see the show, which includes work by Mark Grotjahn, Richard Prince, and Eddie Martinez. Artists Rashid Johnson and Joel Mesler, who both have nearby studios and also have work in the show, were also on hand, mingling among artist Mary Heilmann and collectors Stafford and Laura Broumand. 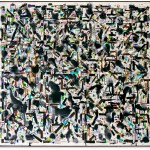 “I want to celebrate the fact that I survived this for 25 years,” Levine said in an interview last week in the gallery space he opened in New York’s Chelsea art district in 2020. The anniversary show, he said, is “a celebration of my life and business and is a way for me to sort of commingle artists. [It’s] about believing in my own story and seeing what we’ve been able to do.”

In 2001, Levine, who was born and raised in Manhattan, was living in Minnesota when he decided to come back to New York and make a new start. As he puts it, “I had a hundred bucks.” But his trip back home ended up coinciding with the terrorist attacks of 9/11, and, with a new baby in tow, he and his wife decided to instead settle in the Hamptons, where Levine opened a rare book store that eventually also became a gallery.

His goal in opening an art space of his own was to join a long art-historical lineage in the Hamptons. “The Hamptons has such a rich artistic history, with Jackson Pollock and the other Abstract Expressionists, and over the years there have been some very serious galleries out there,” he said. “[Bookseller] Glenn Horowitz always used to describe [the area] as a butterfly net… a captive audience.”

Levine’s expertise eventually attracted figures like Richard Prince, who went to Levine in search of books. Gradually, Levine’s network of supporters in the art world expanded, slowly converting him from a book dealer to a gallerist who had a special ability to link artists from all over with Long Island’s monied collectors and art lovers.

“Working with Harper is such a dream,” said the Quebec-based painter Joani Tremblay during the reception of “25 Years,” where her abstractions are on view. “He’s a great gallerist, has all the connections, and is a sincerely nice person.”

For Tremblay, and the other artists who work with Harper, like Jennifer Guidi, Joel Mesler, and Frederic Tuten, having access to the Hamptons is an incredible opportunity.

“There are not many places where you can have a strong summer show,” Tremblay said, referring to the lull that hits the city once the warmer weather moves in. “Maybe you can get a group show or something small, but working with Harper essentially gives us an extra season.”

Having a space and network on the East End became doubly advantageous when the pandemic flushed the rich from Manhattan to their second (or third, or fourth) homes on the East End. There, Levine was ready to receive them, unlike other gallerists who scrambled to find space for pop-ups.

But it wasn’t always clear it was going to turn out this way.

“When the pandemic started,” Levine said, “everyone told me, ‘Fire your team.’” Instead, anticipating that collectors would come to their Hamptons homes to ride it out, he kept his team, and took on additional space in his East Hampton gallery’s building.

In an even bolder move, Levine then expanded to new spaces in New York and Los Angeles, marking Harper’s as a veritable empire.

While Levine’s East Hampton gallery will always be his home, these days, he is equally focused on his New York galleries. In March, he opened a second, larger space on 22nd Street. An artist friend of his was fond of saying that because of all the galleries opening in East Hampton, Newtown Lane, the town’s main thoroughfare, had become the equivalent of 22nd Street: Ross + Kramer, the Hole, Eric Firestone, a new Sotheby’s outpost, and other spaces dot the lane.

But Long Island’s art scene will never rise to the level of Manhattan’s, and Levine seemed to suggest that this isn’t a bad thing. Looking out his newest Chelsea space’s wide windows, the dealer observed, “22nd Street is 22nd Street.”