Egyptian Antiquities Seized from the Met Amid Investigation into Artifact SmugglingRing

Five Egyptian antiques collectively valued at more than $3 million, have been seized from the Metropolitan Museum by the New York District Attorney’s Office. The confiscation is part of an extensive investigation into the international trafficking of Egyptian antiquities that last week led to the indictment of former president and director of the Louvre, Jean-Luc Martinez.

News of the seizure wasfirst reported by the Art Newspaper and confirmed tothe outletby the DA’s office, which said in its warrant that the five objects constitute evidence demonstrating “the crimes of criminal possession of stolen property” and “conspiracy to commit the same crimes.” 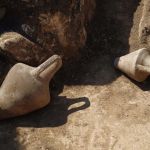 An Ancient Roman Bust, Bought for $34.99, Heads from Goodwill to a Texas Museum

Four of the pieces came from the collection of Roben Dib, a German-Lebanese dealer who is suspected by U.S. and French authorities of selling looted objects to art institutions including the Metropolitan Museum of Art and the Louvre Abu Dhabi. Dib is currently detained in Paris, where he is awaiting trial on charges of gang fraud and money laundering. He has denied any wrongdoing.

Among the artifacts seized were two treasures from the Met’s Egyptian department. One is a resplendent Fayum portrait, a painted panel commonly placed over the face of mummies in Roman Egypt. That work depicts a woman in a blue dress and dates to around 60 BCE.

The other seized work is composed of five fragments of a wall hanging from the 4th or 5th century CE. They are considered one of the oldest representations of the Book of Exodus.

A Met spokesperson did not immediately respond to a request for comment on the seizure of these works.

According to the warrant, both items were sold through the Paris auction house Pierre Bergé & Associates, which employed Christophe Kunicki, a French dealer and archeology expert indicted in the investigation. Kunicki served as a certifying expert of archaeological works at Pierre Bergé; he listed the provenance of the antiquities sold to the Met as “a European collection.” Authorities believe this refers to the collection of three brothers, Simon, Hagop and Serop Simonian, who are suspected of collaborating with Dib.

The Met has been contending with its connections to Dib for several years.

In 2019, the New York institution returned an ornate golden sarcophagus to Egypt after a criminal investigation led by Colonel Matthew Bogdanos, chief of the antiquities trafficking unit of the DA’s office. Bogdanos concluded that the provenance had been falsified prior to the Met’s purchase of it in 2017 for €3.5 million. The Met had bought the sarcophagus directly from Kunicki, who obtained it from Dib and the Simonian brothers. Kunicki and his husband, Richard Semper, were charged in 2020 with involvement in the antiquity smuggling ring.

At the time the coffin was seized, the Met apologized in a statement for the flaws in the provenance research conducted by its Egyptian department and promised to reassess its acquisition process.

A sarcophagus mask valued around $6,500 was also confiscated by the DA’s office. According to the Art Newspaper, all the objects were offered for sale by Dib.