Following last week’s vandalism of a Documenta exhibition space, nearly every artist involved in this year’s edition of the famed recurring art exhibition, called for the increased protection of Palestinian participants.

Days before their statement was published on the platform e-flux, Documenta filed a criminal complaint with the city of Kassel, Germany, where the show is held once every five years.

Documenta reported that vandals broke into the exhibition space for the Question of Funding, a Palestinian collective, and spray-painted phrases such as “187” and “Peralta.” The former is believed to be a reference to a part of the California penal code dealing with murder, the latter an allusion to a young Spanish woman known for her anti-Semitic speeches who has been linked to alt-right groups. 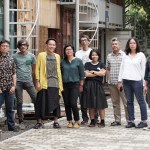 With a Majority-Female 2022 Edition, the Venice Biennale Will Make History for Women Artists

Echoing Documenta’s own language, the artists wrote in their letter that the vandalism “can only be interpreted as a death threat. This is a very worrying escalation of the situation that began almost six months ago here in Kassel.”

The vandalism is the most significant development so far in a controversy derived from allegations from Jewish groups. Those organizations claim that, in including artists of Palestinian descent, Documenta is being anti-Semitic. Documenta and the curator of this year’s edition, the Indonesian collective ruangrupa, have denied those allegations, and have even called some of them racist.

Although the Question of Funding has been at the center of many of these allegations, Documenta’s detractors have also focused on the Khalil Sakakini Cultural Center, a Ramallah-based arts space that ruangrupa included among its advisers. Some members of the German press have falsely claimed that the center has stated connections to Boycott, Divestment, Sanctions, a pro-Palestine movement that has been controversial within Germany.

When the Documenta controversy began, the Khalil Sakakini Cultural Center did not publicly comment. But on Saturday, the center issued a lengthy statement on social media in which it called the allegations against Documenta “baseless, worn-out accusations which are increasingly being used in Germany against every Palestinian and anyone that dare to stand up and speak against israeli occupation and aparthied [sic] practices targeting Palestinians.”

Addressing not only Documenta but all institutions, the Sakakini Center demanded that art spaces “live up to their responsibilities towards the values ​​held by all participants and to ensure freedom of expression and rejecting all forms of racism. We call on these institutions to provide protection for Palestinian artists who will participate in the opening event of the exhibition in June 2022.”

Previously, Documenta said that it would increase its security presence at locations in Kassel for the forthcoming edition, though it did not offer specifics for how it would do so.

Days after the vandalism, Die Zeit, the German publication that first published some of the erroneous claims against the Question of Funding and Documenta, printed an op-ed about Documenta from artist Hito Steyerl. (An English-language version appeared courtesy of the publisher &&&.) Her essay, titled “Context Is Everything, Except When It Comes to Germany,” was billed as an “updated” lecture that she was to give during a Documenta-organized talk series about anti-Semitism and racism. That event was to take place in May but was canceled amid the controversy.

Die Zeit‘s introduction explicitly framed Steyerl’s piece in relation to the controversy. But the piece did not mention the vandalism, nor did it address Palestine or BDS by name, causing some, including critic Zoé Samudzi and the Turner Prize–winning artist Tai Shani, to take issue with it on social media.

Steyerl took to task Documenta’s history, discussing at length the biography of Werner Haftmann, an art historian who advised the quinquennial early on. Recently, Haftmann was revealed to have been a member of the SA, the Nazi Party’s paramilitary wing.

“If the exhibition wants to remain relevant, it would be well advised to reassess the naïve claim to world status through the prism of its own history,” Steyerl writes. “However, this would require a team that would be able or interested in taking on this challenge. Otherwise, instead of writing history, it becomes history itself.”