Back in 1996, the art market was left in shock after a single collector bought up $22 million worth of art at a Sotheby’s auction in London.

The buyer, who called in with a Vienna specialist with the house, was a “mysterious German-speaking collector,” the New York Times reported at the time, and she had purchased pieces by Lucian Freud, Francis Bacon, Pierre-Auguste Renoir, Marc Chagall, Paul Klee, and others all in one fell swoop, making herself a sensation almost overnight.

That collector, the Times went on to reveal, was none other than Heidi Göess-Horten, the ex-wife of Helmut Horten, a Viennese department store owner with whom she began buying art. (She has since remarried two times.) Some years after Helmut’s death in 1987, a new passion for art collecting was ignited in Heidi, who currently owns 700 pieces and ranks on the ARTnews Top 200 Collectors list. 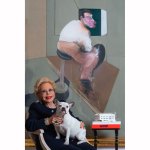 Now, in addition to those hundreds of artworks, she also owns a museum, the Heidi Horten Collection, which opened in Vienna earlier this month.

In a sense, Göess-Horten has even come full circle, naming Agnes Husslein-Arco, the Vienna Sotheby’s specialist who placed bids for her in 1996, as the museum’s director.

It is not the first time Göess-Horten’s collection has been seen in Vienna — that would be in 2018, when a survey of it opened at the Leopold Museum. But that exhibition came and went in a matter of six months, and the goal with the Heidi Horten Collection is to offer a permanent view of one of the country’s richest private collections, which has rarely been seen publicly.

“I knew after the first public presentation of my collection that I wanted to preserve the works for posterity and share a treasure with people that has been with me in my private life for many years and given me such happiness,” Göess-Horten toldARTnews in an email.

“That’s why I see my museum as a place of discovery, of sensuous experience, of the joy of art—because that’s what art has been and still is for me: a vital source of joy!”

So far, according to those involved with the museum, the Viennese have indeed taken pleasure in visiting the museum, which has 16,145 square feet of exhibition space. Self-reported data from the museum say that at least 800 people visited each day during the space’s first week and, on Thursday, there were already crowds pouring in just 15 minutes after opening.

In some ways, this fervor from the public is a bit of a surprise, since Vienna is already packed with museums, among them the Albertina, mumok, the Kunsthalle Wien, and more, all of which are walking distance from the Heidi Horten Collection. But Husslein-Arco did not seem shocked that the museum already had such a large audience.

“The people love it,” she said.

Some coming to the exhibition are likely to arrive expecting some of the iconic works in Göess Horten’s collection, including paintings by Bacon and Roy Lichtenstein. Those paintings, as well as some of the other more famous ones owned by Göess-Horten, are still in her house, however. Instead, the spare opening hang at the museum, set across three pristine floors, is primarily devoted to emerging and mid-career artists, many of whom are Austrian.

“I did it on purpose,” Husslein-Arco said. “I wanted to show two things: that the collection keeps growing and that there is a younger art” in Göess-Horten’s holdings. She also wanted to foreground the architecture, by the Vienna-based firm ENTERprise architects.

The Heidi Horten Collection’s building seems small from its outside, but on the inside, it feels big. (The price to get in, at 15 euro per adult visitor, is hardly small either.) Two staircases appear to float over viewers’ heads, and there are large airy parts in which one can see right up to the roof.

This scale allows the museum to show grand works, most notably Constantin Luser’s Vibrosauria (2022), a 20-foot-tall sculpture of a female dinosaur that is crafted from brass instruments twisted together to form something like an armature. The sculpture can be played by up to 24 musicians at once. Meanwhile, the museum’s tearoom is itself a work of art by Markus Schinwald, who covered its walls in paintings of an old-school teahouse. Schinwald Photoshopped out any people who appeared in his source images, however, and anyone who inhabits the room is meant to effectively figure in their place.

More minimal pieces shine as well. A Dan Flavin sculpture composed of a fluorescent lighting tube propped against a corner gets a gallery to itself, as does Lili Reynaud-Dewar’s video Lady to Fox (2018), in which the artist, painted entirely red and wearing only a set of white sneakers, gyrates among a herd of sheep. That work stems from Göess-Horten’s longtime love of animals, which also informed her decision to buy works by Claude Lalanne, Lena Henke, and Ulrike Müller.

There’s enough blue-chip art to whet the palette of those wanting bigger names. Among the offerings are two paintings resulting from a collaborative effort by Andy Warhol and Jean-Michel Basquiat (plus a drawing by the latter working solo), two of the six Lucio Fontana paintings that Göess-Horten owns, a painting from Robert Rauschenberg’s beloved early ’60s period, and a painting made with dead butterflies by Damien Hirst.

More works by stars like Franz Marc, Georg Baselitz, and Ernst Ludwig Kirchner are likely to figure in future shows, but it’s these lesser-known artists that speak to the depth of her collection. After all, the opening hang is just 50 works, or roughly 7 percent of her holdings.

“I am convinced that my collection contains treasures that are unmatched in Vienna, in Austria, even in Europe,” Göess-Horten said.