Ukrainian-born billionaire and philanthropist Victor Pinchuk and his wife Olena are auctioning a sculpture by Jeff Koons at Christie’s this month in London to raise funds for medical aid to Ukrainian soldiers during the ongoing war with Russian forces.

The metallic pink sculpture, titled Balloon Monkey (Magenta), 2006-2013, is estimated to fetch £10 million ($12.6 million). Other editions of the sculpture have outpaced Christie’s estimate, however. In November 2014, Balloon Monkey (Orange), a piece from the same five-piece series, sold for $25.9 million. In May 2019 his silver sculpture Rabbit(1986) sold for $91 million.

The current piece will be offered during an evening sale dedicated to works made in the 20th and 21st centuries at Christie’s in London at the end of the month. The proceeds will go to the U.K. office of the collectors’ family foundation to be distributed. 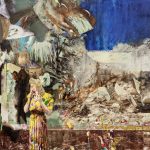 “Every fellow Ukrainian civilian killed or wounded by Russian shelling, shooting, and systematic violence means a wound in our souls,” Pinchuk said in a statement. “With the proceeds of the auction, we can help save lives. We can help make lives destroyed by war whole again.”

Koons, who is a personal friend of Pinchuk, said the upcoming lot has its own Ukranian roots — having been inspired by Venus figurines he saw at the National Museum of the History of Ukraine in Kyiv before producing the work. That museum is among the few cultural spaces that has been spared damage or destruction amid the conflict.

Pinchuk, a former politician who amassed his wealth in the the steel industry, has been active in promoting his national roots and Ukrainian political causes in the West amid years of conflict with Russia. The country’s second richest person, he founded in 2006 a namesake art space, Pinchuk Arts Center, dedicated to showcasing Ukrainian contemporary artists. He appeared on ARTnewslist of Top 200 collectors between 2008 and 2015.

After closing its doors in Kyiv amid the war’s outbreak, the center hosted an exhibition at the Venice Biennale, “This Is Ukraine: Defending Freedom,” in partnership with the Ukrainian government, where President Volodymyr Zelensky addressed attendees remotely. The exhibition was staged in lieu of the center presenting its much-heralded Future Generation Art Prize — which in the past has been given to to artists Njideka Akunyili Crosby, Martine Syms, Korakrit Arunanondchai, and Toyin Ojih Odutola.

Since Russia’s assault on Ukraine began in February, the Pinchuks have funneled an estimated $30 million in medical aid through their foundations to Ukrainian soldiers and hospitals treating injured civilians. As of last month, the death toll among Ukrainian civilians reached 4,916.

In March, it was reported that Pinchuck’s metal supply company Interpipe was procuring protective equipment for the Ukranian military and defense forces. In 2018, Pinchuk was sanctioned by the Russian Federation, though Interpipe was reported to have exported pipes and railway parts to Russia worth $54 million in the first half of 2019. He maintains that the company has no current business interests with Russia.