A 1964 painting depicting the British painter Lucian Freud by Francis Bacon will be sold at auction next month in London after nearly 60 years out of the public eye.

Estimated to fetch a price of £35 million ($42 million), the work will be offered during an evening sale dedicated to British Art at Sotheby’s in London on June 29, alongside other works by John Constable, David Hockney and Flora Yukhnovich.

The painting, Study for Portrait of Lucian Freud, was inspired by a photograph depicting Freud sitting on a bed with his arms outstretched, that was shot by John Deakin, a friend and assistant to Bacon. Deviating slightly from its source image, the canvas, measuring 78 by 58 inches, shows Freud with his shirt unbuttoned and his facial features distorted. 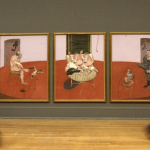 The artists first met in 1944. Freud, who Bacon painted frequently throughout the 1960s, once described the approach the Irish-born painter took to his canvases and the many subjects he rendered as “completely ruthless.” It was an attitude that Freud—known for labor-intensive and painterly portraits of his acquaintances— once remarked freed him to be “more daring” with his own work. The two painters remained friends until the 1980s, up until which various rifts fueled by Freud’s apparent jealously over Bacon’s rising fame would fracture their relationship.

Bacon produced the painting originally as a central panel for a large-scale triptych. All three panels hung together as part of a traveling exhibition to Hamburg and Stockholm, while the present lot was last shown in Dublin in 1965; the two others reside in private collection and at the Israel Museum in Jerusalem, respectively. After passing through London and European collections, it was purchased by the current owner in 1982.

The work will go on view at Sotheby’s New Bond location on June 23, before going up on the auction block in London at the end of the month.