Earlier this week, the international art world once again descended on Kassel, Germany, for this year’s edition of Documenta, a recurring art exhibition that holds considerable influence for artists, curators, dealers, critics, and more. Curated by the Indonesian collective ruangrupa, the offerings are set to be offbeat and experimental, and whatexactlythe exhibition holdsis still unfolding.

But what is Documenta, and why does the art world care about it so much? Below is a guide to one of the world’s most storied art exhibitions, its many controversies, and the many oddities that have come with it.

What, exactly, is Documenta?

Most in the art world would say it’s one of the most important recurring exhibitions held anywhere. Staged once every five years in Kassel, Germany, it is held in high esteem among artists, curators, and art historians, though less so, perhaps, among collectors and dealers, since its offerings tend to skew more academic and less market-friendly than what appears at the Venice Biennale in Italy. 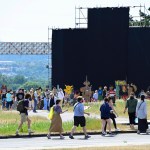 Documenta Leader Speaks Out on Controversial Banner: 'Anti-Semitic Depictions Must Have No Place in Germany'

Often, the spirit that guides Documenta is imbued with a kind of weirdness that is lacking in other, more buttoned-up biennials. It’s also often cloaked in mystery, with its artist list often dropped just days before the show opens.

The curators that are chosen to helm Documenta typically work in an experimental vein, with unconventional exhibition structures and an emphasis on conceptual art in more recent editions. In the past decade, Documenta’s curators have also taken a global focus, making it part of their remit to look beyond Europe for their artist lists.

So, what makes Documenta so important, anyway?

The answer to this one will vary a lot, depending on the person, but almost everyone will agree that Documenta is a forward-thinking show that influences curators and historians.

The first few editions of Documenta are credited with having boosted the international profile of movements like Abstract Expressionism, Minimalism, and Conceptualism. Catherine David’s Documenta X, from 1997, is fondly remembered for hosting digital art projects on its website before that sort of thing was the norm at biennials. Okwui Enwezor’s Documenta 11, from 2002, initiated a turn toward a globalist purview that is still being felt in the art world. Adam Szymczyk’s Documenta 14, from 2017, placed a crucial focus on Indigenous art that has rippled out to other biennials in the years since.

In addition to pushing international biennials in new directions, Documenta has a tendencyto bring new figures into the canon. As a result, artists whose work previously wasn’t well-known to the international art world can get larger attention and begin to appear in museums.

Kassel is a schlep. Is the trip worth it?

Yes. Documenta is an enormous show, with 32 venues planned for the 2022 edition, including the Fridericianum, the biggest museum in Kassel and one of the oldest institutions in Europe. And in a way, it could be worse: Documenta 14, held in 2017, was spread across both Kassel and Athens, making it difficult to see the whole show. And 2012’s Documenta 13, organized by Carolyn Christov-Bakargiev, included portions in Kabul, Afghanistan; Cairo and Alexandria in Egypt; and Banff, Canada.

Who gets to curate Documenta?

Almost every edition has been helmed by one person who was picked by a selection committee. That person then picks other curators to serve on a team that ultimately helps organize the show. Although the artistic director of each edition tends to get the most attention, spots on the curatorial team are also coveted posts, and obtaining one can be a career-making achievement. In 2014, the Art Newspaper reported that the artistic director receives around 100,000 euros a year.

For a long time, Documenta was the province of white Europeans, many of whom were men, and so it was considered groundbreaking when, in 1997, Catherine David became the first woman to oversee an edition of the show. The next edition, in 2002, was helmed by Okwui Enwezor, who remains the only Black curator, and the only African-born one, to organize an edition of Documenta.

The 2022 edition was curated by ruangrupa, an Indonesian collective, which is the first artists’ group to organize an edition of Documenta. (It is not the first time Documenta has been organized by multiple people, however—that would be 1968’s, when a 24-person council split up the leadership.) Ruangrupa is also the sole group or person from Asia to curate Documenta. As of 2022, there has never been a Latin American, Latinx, or Indigenous artistic director of Documenta.

Who gets to be in Documenta?

There’s no set mandate for who gets to be in Documenta, which is left to the discretion of the artistic director. Where Documenta differs from most other biennials like it is that most chosen artists are relatively lesser-known in Europe. That doesn’t always mean they’re in the early stages in their careers, however. Many dead artists have been shown at Documenta years after their passing, and some participants are late-career artists who go on to achieve greater recognition as a result of showing there. Generally, artists are given two years to craft their Documenta projects.

The German taxpayers’ money essentially helps mount the country’s most important art exhibition. Budgets for each edition vary significantly, though the 2022 one was given €42 million (the equivalent of $51 million when it was initially announced), the largest amount ever set aside for a Documenta show to date.

Why is Documenta held in Kassel?

Kassel is no Venice, and for those outside Germany, it can seem a bit of a mystery as to why the art world would flock there for a quinquennial. Ultimately, it all comes down to history. Documenta was founded by the art historian Arnold Bode, who was a Kassel resident, and he planned the first edition to coincide with the Bundesgartenschau, a roving biennial devoted to landscaping that is known, among other things, for its rich displays of flowers. In 1955, the year of the first Documenta, the Bundesgartenschau was held in Kassel.

How did the first Documenta come about?

The first Documenta, from 1955, was staged a mere decade after World War II, which had left Germany in shambles. The specter of Nazism continued to haunt the nation, and at the time, the last major exhibition of modern art was “Degenerate Art,” a show staged by the Nazi Party that intended to cast the avant-garde as politically backward and potentially detrimental to German society. Seeking to help Germany rehabilitate itself, Bode sought to organize an exhibition that would “reveal the roots of contemporary art in all areas,” as he once put it.

The resulting 168-artist show elevated the modern art that had at one point been scorned in Germany, staking a claim for the continued relevance of figures like Henri Matisse, Pablo Picasso, Ernst-Ludwig Kirchner, and more. Almost all of the artists were white men, although women like Sophie Taeuber-Arp and Paula Modersohn-Becker were included. (The gender and racial imbalance persisted for many years, and once prompted the collective the Guerrilla Girls to ask in 1987 why that year’s Documenta was 95 percent white and 83 percent male.) Bode’s first Documenta was a hit, with 130,000 people visiting the show in 100 days.

Documenta 2, in 1959, was even bigger, with 339 artists and 1,770 works. Since then, the show has continued to grow in scale—and attendance numbers, too, have continued to mount.

What else should I know about Documenta’s history?

There has been a good deal of recent scholarship surrounding Documenta and the hidden politics contained within the show. The most explosive revelation to result from that research was news that art historian Werner Haftmann, an adviser who consulted with Bode on the first few editions, was a member of the SA, the Nazi paramilitary wing. A 2021 exhibition about Documenta’s history at the German Historical Museum in Berlin asserted that other initial advisers also bore out Nazi connections.

That show also explored the role that Documenta played in shaping global politics, most notably through the elevation of American-led movements such as Abstract Expressionism in editions like Documenta 2. The following edition also involved an organization that received funding from the CIA. Lars Bang Larsen, the show’s curator, told Artnet News that, in its early years, “Documenta was part of a geopolitical battle and a cultural battle.”

Are there other controversies surrounding Documenta that I need to be aware of?

Yes, perhaps too many to count, since each edition comes with its own ado or two (or three, or four, or even more, sometimes). Documenta 14, for example, faced allegations from all sides that its organizers had severely mismanaged funding. (The curators denied this.) Documenta 15, the current one, is currently in the midst of controversy over the inclusion of a Palestinian collective, which some Jewish groups have construed as being anti-Semitic. (The curators have also denied that.)

In short, there are too many brouhahas to round up here. Thankfully, Documenta has detailed histories for each edition on its website.

The Venice Biennale has the Golden Lion. Does Documenta give out its own prize?

Documenta awards the Arnold Bode Prize, although it comes with far less clout (though more money) than the Golden Lion. Technically given out by the city of Kassel, the prize comes with just 10,000 euros. (There is no monetary award for the Golden Lion.) It is awarded biannually and during every Documenta edition, with past winners including Hans Haacke, Olu Oguibe, and Gerhard Richter.

Is the art at Documenta for sale?

Documenta is not a selling exhibition, so the work cannot be bought in the traditional sense by approaching a representative for Documenta, as one would for a gallery at a fair like Art Basel. Still, Art Basel’s opening often overlaps with—or occurs close to—Documenta’s, which means dealers will try to use the momentum gained from participation in that show to hawk works at the fair.

How much does it cost to attend Documenta?

In 2022, a full-price single-day adult ticket cost a relatively affordable 27 euros ($28). That ticket includes access to local transportation, which comes in handy when you’re trying to access dozens of venues. But Documenta is too big to see in full in one day, and so the show also offers a two-day option at 45 euros ($47).