Cecilia Vicuña, renowned multi-hyphenate artist and a recipient of the Golden Lion for Lifetime Achievement at the 2022 Venice Biennale, has joined Xavier Hufkens in Brussels. Her first presentation with the gallery will be in 2023. She will continue to be represented by Lehmann Maupin in New York, Hong Kong, Seoul and London. 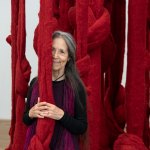 Born in Santiago de Chile, but a longtime resident of the United States, the 74-year-old artist has received a surge of late-career acclaim in recent years: in 2019 she was nominated for the Guggenheim Museum’s prestigious Hugo Boss Prize and was awarded Spain’s most prominent art award, Premio Velázquez de Artes Plásticas. Her work features prominently in the Museum of Modern Art’s rehang and is currently the subject of a solo exhibition at the Guggenheim, “Cecilia Vicuña: Spin Spin Triangulene,” her first in the city.

Vicuña has a prolific, wide-ranging body of work—with an affinity for ephermal materials with an improvised affect—that has made her difficult to classify. In an unusual move, the Guggenheim show primarily features her exuberant paintings and painted screens, though several of her ethereal mixed media mobiles dominate a first-floor gallery.

Before her visual art was embraced by institutions worldwide, Vicuña was known foremost as a poet and, since the 1960s, has been an ardent activist driven by the intersection of environmental peril and unchecked capitalism.

In 2019, more than 1.2 million people protested in the streets of Santiago against class disparities and the rising cost of living in Chile. Vicuña was among the artists to publicly rally on the side of the demonstrators and, in a statement to ARTnews, said“the beauty of this movement is that it feels as an awakening expressed in joyful and peaceful massive protests emerging in every corner.”

In March, she received the Golden Lion for Lifetime Achievement alongside Katharina Fritsch,making her the firstartist of Latin American descent to win the award in years. (Both artists are included in the biennial’s main show.) Cecilia Alemani, the curator of the biennale’s main exhibition, said in astatement that Vicuña had “travelled her own path, doggedly, humbly, and meticulously, anticipating many recent ecological and feminist debates and envisioning new personal and collective mythologies.”