Protestors gathered at the British Museum in London on Sunday to call for thereunification of the Parthenon Marbles with Greece as international support grows for a resolution to the decades-long cultural row.

The protest was organized by the advocacy group British Committee for the Reunification of the Parthenon Marbles (BCRPM) and marked the 13th anniversary of the inauguration ofthe Acropolis Museum in Athens.

Activists unfurled Greek flags and a banner reading “Reunify the Marbles!” inside the museum, while English author and honorary Greek citizen Victoria Hislop presented a cake with the numbers “1” and “3.” The 5th-century BCE statues have been held in the British institutions since 1816, after they were removed from the facade of the Acropolis under the direction of Scottish nobleman Lord Elgin. 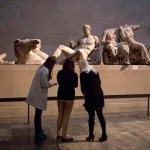 At the time, Greece was under Ottoman occupation. The matter of ownership has partly hinged on interpretations of which party had the power to authorize their removal. Successive Greek governments have called for the marbles’ return, and in 2009 Athens unveiled state-of-the-art facilities at the foot of the Acropolis built for their display.

A growing number of British lawmakers and have backed the campaign for the repatriation of the marbles to Greece. The Labour politician Shami Chakrabarti told theGreek newspaperTa Neathat “there could not be a better moment [than the 13th anniversary of the Acropolis museum] for the Parthenon marbles to be reunited in their Athenian home.”

Ahead of the protests,George Osborne, the chairman of the British Museum, toldtheLBCradio station that thereis a“deal to be done” for a potential loan of the artworks, signaling a softening stance by an institution which has long resisted communications with Greece. He avoided framing any potential deal as a restitution, as opposed to a long-term loan, and said he could not “talk for all of the trustees of the British Museum.”

The U.K. prime minister, Boris Johnson, has said the trustees of the British Museum, not the country’s government, can decide whether the Parthenon Marbles will return to Greece. A government spokesman told the Guardianthat the museum“operates independently of the government” and “is free, rightly, from political interference.”

In a statement tothe Art Newspaper, the British Museum said that it “is always willing to consider requests to borrow any objects from the collection, we lend between 4,000 to 5,000 objects every year. For instance, 170 ancient Hellenic objects are touring Australia and New Zealand where they will reach and inspire new audiences before returning to the museum.”

In May,UNESCO announced that the U.K. will hold the first talks with Greece to discuss Greece’s claim for the marbles. No date has yet been set for the meeting of U.K. arts minister Stephen Parkinson and the Greek culture minister Lina Mendoni. However, in an interview with BBC Radio 4’s Front Row,Parkinson reiterated that despite the upcoming meeting, the fate of the marbles will ultimately be decided by the trustees of the museum.