According to the search warrant, the F.B.I.’sArt Crime Teamhad been investigating the authenticity of the works since the their discovery in a storage unit in Los Angeles in 2012. Scrutiny of the paintings intensified in February after they were unveiled to the public by the museum ahead of the opening of the exhibition “Heroes & Monsters: Jean-Michel Basquiat”.

The museum’s spokesperson, Emilia Bourmas-Fry, wrote in an emailed statement to the Timesthat it would continue to cooperate with the agency’s investigation. 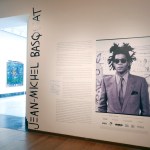 “It is important to note that we still have not been led to believe the museum has been or is the subject of any investigation. We continue to see our involvement purely as a fact witness,” she said.

The exhibit was originally planned to run until June 2023 but, according to Bourmas-Fry, the painting’s owners had not extended the museum’s contract. The show was set to close this Thursday and travel next to Italy.

It featured 25 vibrantly painted slabs of cardboard that the museum said were scavenged by Basquiat in late 1982 while he was living and working out of a studio space beneath the Venice, California-home of art dealer Larry Gagosian.

Questions of their authenticity arose almost immediately after their debut in Orlando. Notably, the Times reported in February that the cardboard used in at least one of the paintings included a FedEx typeface that experts have argued wasn’t created until 1994—six years after Basquiat’s death.

The affidavit for the search warrant reviewed by the Times was issued on the possibility that the crimes of conspiracy and wire fraud occurred. In the documents, authorities said the investigation had revealed “false information related to the alleged prior ownership of the paintings” as well as “attempts to sell the paintings using false provenance, and bank records show possible solicitation of investment in artwork that is not authentic.”

According to the paintings’ owners, Basquiat allegedly sold the works directly to television screenwriter Thad Mumford for $5,000 in cash without the knowledge of Gagosian. (The dealer, in a statement to theTimes, said the scenario of their creation sounded “highly unlikely.”) According to the museum, Mumford left them in a storage unit for 25 years until he failed to pay rent on the unit and its contents were auctioned off in 2012.

The collection was bought by art and antiquities dealer William Force and his financier, Lee Mangin, for around $15,000. An interest in six of the 25 paintings was bought by Los Angeles trial lawyer Pierce O’Donnell.

However, Elizabeth Rivas, a special agent for the FBI,stated in the affidavit that Mumford told her in 2014 that he “never purchased Basquiat artwork and was unaware of any Basquiat artwork being in his storage locker.” He signed an affidavit in 2017 stating that he had never met Basquiat. Mumford died in 2018.

The owners of the paintings and the museum’s director and chief executive, Aaron De Groft, have maintained that the works are Basquiat originals, citing a battery of expert testimony. The Mumford trove could collectively be worth $100 million if proven authentic.

The Basquiat estate disbanded its authentication committee in 2012, when other artists’ estates, including Andy Warhol’s, had ceased authenticating works because of expensive litigation.