Aaron De Groft lost his job as director and chief executive of the Orlando Museum of Art in Florida on Tuesday night, days after the FBI seized 25 paintings with a contested attribution to Jean-Michel Basquiat that were on display in the museum.

Agents raided the museum on Friday after presenting museum employees a 41-page affidavit for the search warrant based on an investigation which found “false information relating to the alleged prior ownership of the paintings.” According to the New York Times, which cited anonymous museum employees, the board of trustees decided during a meeting on Tuesday morning convened to discuss the controversy to remove de Groft from the museum. 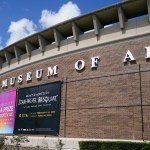 Cynthia Brumback, the chairwoman of the museum’s board, said in a statement that “effective immediately, Aaron De Groft is no longer director and C.E.O. of Orlando Museum of Art.”

She added that the museum’s trustees were “extremely concerned about several issues” regarding the Basquiat exhibition, titled “Heroes and Monsters.” Among them was “the recent revelation of an inappropriate e-mail correspondence sent to academia concerning the authentication of some of the artwork in the exhibition.”

Last week, theTimes reported that the affidavit presented to the museum quoted an email exchange between De Groft and one of the experts hired to authenticate the paintings, later identified as Jordana Moore Saggese, a professor of art at the University of Maryland. Saggese, who was paid $60,000 by the museum for her research, requested for her name not to be associated with the Basquiat exhibition.

According to the affidavit, De Groft told her, “Do your academic thing and stay in your limited lane.” He then threatened to disclose the details of their agreement with her employer. “You want us to put out there you got $60 grand to write this? Ok then. Shut up. You took the money. Stop being holier than thou,” he allegedly wrote.

“We have launched an official process to address these matters, as they are inconsistent with the values of this institution, our business standards, and our standards of conduct,” Brumback said in the statement.

The Orlando Museum of Art unveiled the artworks as little-known Basquiats in February ahead of the opening of “Heroes & Monsters.” Their authenticity was almost immediately called into question by the art community. The Times reported in February that the cardboard on which one of the works was painted included a FedEx typeface. Experts noted that that typeface wasn’t created until 1994—six years after the artist’s death. The claim was reiterated by the search affidavit.

De Groft and the owners of the artworks have said that they were painted by Basquiat in late 1982 while he was living and working out of a studio space beneath the California home of art dealer Larry Gagosian. Basquiat allegedly sold the works directly to television screenwriter Thad Mumford for $5,000 in cash—without the knowledge of his dealer.

The works then lay forgotten in a storage unit for 25 years until Mumford failed to pay rent on the space. The storage unit’s contents were subsequently auctioned off in 2012.

Elizabeth Rivas, a special agent for the FBI, stated in the affidavit that Mumford told her in 2014 that he was unaware of any Basquiat artworks being in his storage unit. He signed an affidavit in 2017 stating that “at no time in the 1980s or at any other time did I meet with Jean-Michel Basquiat, and at no time did I acquire or purchase any paintings by him.”