With a $440 M. Endowment, New Foundation Aims to Shake Up ArtsPhilanthropy

A newly established organization based in Milwaukee will dole out some $17 million in grants annually, putting it on the same as leading philanthropic enterprises like the Warhol Foundation.

For its inaugural round of grants, the Ruth Foundation for the Arts, which has been established through a $440 million endowment from the late Ruth DeYoung Kohler II, has given $1.25 million to a vast array of 78 arts nonprofits across the United States. The grants have been given out in increments of $10,000, $20,000, and $50,000, depending on the organization’s operating budget.

These include the Laundromat Project in Brooklyn, Project Row Houses in Houston, Creative Growth in Oakland, the Skowhegan School of Painting & Sculpture in Maine, BlackStar Projects in Philadelphia, the Bemis Center For Contemporary Arts in Omaha, the Center for Contemporary Arts in Santa Fe, the Leather Archive and Museum in Chicago, the Tamir Rice Foundation in Cleveland, and the Institute 193 in Lexington, Kentucky. 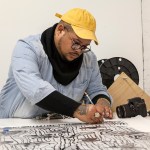 “We tried to look for organizations that are clear in their missions and that have figured out the balance between community making and creative process,” Karen Patterson, the foundation’s first inaugural director, said in an interview. “We’re looking to fund arts organizations that are unique in their missions. That’s what Ruth cared about. She was exacting in her understanding of art-making—she liked things we hadn’t seen before.”

Initially, Patterson expected that in the first round of grant-making the foundation would give out $50,000 each to 25 organizations, but in talking with several leading artists that were involved in the nominating process, she realized that they “could have a big impact” on small organizations where “$10,000 could go a long way.”

The foundation’s grants are unusual in that they are unrestricted, meaning that they can go toward anything required to keep an arts organization afloat, including operational expenses. Traditionally, most art-world philanthropy is given for specific programmatic endeavors, primarily to mount exhibitions or produce catalogues.

Patterson, who was most recently curator and director of exhibitions at the Fabric Workshop and Museum in Philadelphia, said this decision comes from her own experience of working as a curator at a nonprofit. “I know what an unrestricted grant feels like, and I wanted to start there,” she said, adding that future grant programs to “unsexy” initiatives like upgrading HVAC systems or flat files.

One grantee is the Los Angeles Visual Arts Coalition, an organization composed of some 30 L.A.-based arts spaces that was established during the pandemic and includes Craft Contemporary, SPARC, the Mistake Room, JOAN, and LAXART. Megan Steinman, a cofounder of the coalition, said that the grant’s unrestricted nature gives organizations the ability to “define for ourselves how grants like this can do their best work as opposed to organizations having to fit themselves into the mold of existing foundational structures and define their work by what’s available to them from the grantor. We get to keep building for ourselves.”

Patterson also said she hopes to operate each grant cohort like an artist residency insofar as awarded organizations would have access to a “pool of experts that can help them with strategic planning, equity work, collections consulting.” It’s all a way to help “alleviate the pressure” so that organizations that “want to do the good work can do the good work,” she said.

The foundation’s new mission has come together in roughly the past six months, after Patterson was hired to lead the foundation that was established through a bequest from Ruth DeYoung Kohler II, a member of Wisconsin’s Kohler family, which is known for manufacturing plumbing products. Patterson had previously worked for DeYoung Kohler as a senior curator at the John Michael Kohler Arts Center in Sheboygan, Wisconsin, where DeYoung Kohler was director for more than 40 years.

DeYoung Kohler was a major patron of the arts in the Midwest, having served as chairman of the Wisconsin Arts Board and as a panel member for the National Endowment of the Arts. In 1983, she set up the RKD Foundation, which acted as a way for her to give privately to various arts organizations in the Midwest and elsewhere in the country. Over the course of nearly four decades, that foundation doled out more than $20 million.

When DeYoung Kohler passed away in 2020, she left the RKD Foundation $440 million; the $17 million annual goal represents 5 percent of the organization’s assets. “This is substantially more generous, and we’re giving in her spirit,” Patterson said. “We’re launching by honoring the ways in which she gave historically—small, off-the-beaten track, lovely arts environments in Wisconsin, Illinois, and throughout the U.S.”

In addition to organizations that DeYoung Kohler had previously given to, a significant share of the 78 grantees were selected through a nomination process that involved nearly 50 artists, including Mel Chin, Nicholas Galanin, Michelle Grabner, Trenton Doyle Hancock, Guadalupe Maravilla, Ebony G. Patterson, Gala Porras-Kim, Jaune Quick-to-See Smith, and Nari Ward.

“We asked the artists to name three organizations that had an impact on their practice as well as their communities, which was very important to Ruth,” Patterson said. “We’re artist-forward in that we see artists as decision makers when it comes to community making and supporting creative process. This stems from the idea that we believe in them because artists believe in them.”

Enacted almost like a chain letter, in which artists Patterson knew would then refer other artists to participate, the nomination form involved three “straightforward” questions, Patterson said, that were along the lines of “Name an organization that just gets it” and “Name an organization where you’ve been treated with respect.”

Artist Mark Thomas Gibson, who served as a nominator, said what most excited him about the Ruth Arts nominating process was that it presented “an opportunity for artists to give back. This gives artists the agency and the ability to stop and consider those institutions that we’ve interacted with and benefitted from in a strong and clear way.”

He added, “Often the depth of what these institutions are able to do is limited. We sometimes forget that they need money.”

Jil Weinstock, the director of the Baxter Street Camera Club in New York, which received a $10,000 grant, said that the artist-led nomination process shows the impact that an organization like hers has had on artists. “We can use this where we need it,” she said. “It gives a sense of support and the idea that they have the confidence in us that we can put it to good use, instead of [a funder] saying ‘this is where we align with your programs.’”

For its first few years, Ruth Arts grants will be awarded through nominating processes like this year’s and the pool will include these 78 awardees as well as the other organizations that were nominated this year but not selected for a grant. Patterson will also establish an artist advisory committee for the foundation.

“We will try to be responsive and nimble as we build,” Patterson said. “We want to distribute funds to those who need it. This is about impact and acknowledging the work that people are doing, especially now.”

All My Relations Arts
Minneapolis, MN