Christie’s staged two back-to-back sales of modern and contemporary art on Tuesday afternoon in London and Paris, bringing in a combined total of $250 million with fees.

The 106 lots offered spanned works from young newcomers like Anna Weyant and pieces by long-gone art historical figures like Claude Monet. Some 97 works sold, with one piece by Cy Twombly withdrawn in advance. Twenty-eight lots in the auctions were guaranteed; 24 of them were secured with irrevocable bids. 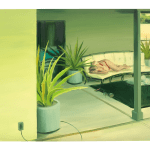 The total hammer price for the entire grouping across both sales before fees came to $200.7 million, falling at the low end of the pre-sale estimate of £145 million–£213 million ($177 million–$259 million). Among the high-profile attendees who could be spotted in the salesroom was dealer Helly Namad.

Blue-chip male artists accounted for most of the top lots.

Yves Klein’s 1960 canvas Anthropométrie de l’époque bleue, (ANT 124), which was offered for sale for the first time in the Christie’s auction. The blue-toned painting, which Klein executed using a sponging-technique, was offered at £24 million ($30.2 million). Five bidders competed for the work, which sold for a final price of £27 million ($33.4 million), going to a bidder on the phone with Christie’s New York specialist Alex Rotter. The result makes it one of the most valuable works by Klein to come to auction, though that price is still shy of his current record of $36.4 million, set in 2012 by the sale of FC1 (Fire Color 1), from 1962.

A metallic pink Jeff Koons sculpture titled Balloon Monkey (Magenta),2006–2013, was sold at the sale by the Ukrainian-born billionaire and philanthropist Victor Pinchuk and his wife Olena to raise money for medical aid to Ukrainian soldiers during the ongoing war with Russia. The work sold for within its estimate £10 million ($12.6 million).

The Koons was won by another mega-collector, the Copenhagen-based collector Jens Faurschou. In a statement following the sale, referring to charitable initiatives in the art world, Faurschou said, “We need more.”

René Magritte’s Souvenir de voyage (ca. 1962–63), which depicts a grey stone apple and a crescent moon against a cloudy sky, brought some suspense to the sale. A prolonged bidding war between five bidders saw the work’s hammer price move far over its £5 million ($6 million) high estimate. The work sold for a final price of £16 million ($19.7 million), going to a bidder on the phone with Christie’s London-based specialist Guy Agazarian.

Hot off a new record minted during the New York marquee auctions last month, Ernie Barnes was represented by Main Street Pool Bar (1978), a nighttime bar scene. The painting soared past its initial estimate of £80,000 ($97,000), going for a final price of £1.5 million ($1.8 million).

A sculpture by Simone Leigh, the recipient of the Venice Biennale’s Golden Lion award this year, opened the London event. The work, Untitled V (Anatomy of Architecture series), depicting a bust of a woman adorned with roses and straw, sold for a double-estimate final price of £724,500 ($880,000).

A 2003 acrylic and graphite on canvas painting by Michel Majerus titled Milky Way, which depicts the work’s title in a bold font, went for £403,000 ($490,000), more than double it estimate. Majerus is the subject of a survey at the KW Institute for Contemporary Art in Berlin that is scheduled to open in October.

Half of the sale’s offerings by living artists were made by women. One work by the 27-year-old painter Anna Weyant, who recently joined Gagosian (its namesake dealer is rumored to be her romantic partner), surpassed its estimate. Her 2019 painting Ingrid with Flowers sold for £403,000 ($490,000), more than twice the £150,000 estimate.

Leonora Carrington, whose writings lent the current Venice Biennale its title, was represented by Ferret Race (Stoat Race), which saw competition from three bidders. It went to a Hong Kong buyer for £1.4 million ($1.7 million). The result was still shy of the artist’s current record of $3.3 million, paid for The Garden of Paracelsus (1957) in May.