The Philadelphia Museum of Art has acquired a Siah Armajani–designed lecture room from the Fleisher Art Memorial, a community center and art school in the city.

Titled the Louis Kahn Lecture Room, the space was designed by Armajani and commissioned as a gift for the Fleisher from the Association of Public Art in 1982.

Armajani, who immigrated from Iran to the United States in 1960 and died in 2021, is known for work that blurred the boundaries between sculpture and architecture. In 2018, his work was the subject of a Walker Art Center retrospective that later traveled to the Metropolitan Museum of Art. 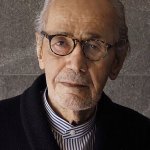 Siah Armajani, Ceaselessly Imaginative Artist with a Belief in the Power of Public Art, Is Dead at 81

The Louis Kahn Lecture Room was meant to be used to teach classes. Its design is inspired by Quaker traditions and and the architecture of Kahn himself, who was a student at the Fleisher. The floor is inlaid with a Kahn quote: “Schools began with a man under a tree who did not know he was a teacher, sharing his realization with a few others who did not know they were students.”

In recent years, the room has not been used for teaching, however, and when the Fleisher hired Atkin Olshin Schade Architects to deliver a proposal on the redesign of the school, the firm recommended that the room be removed so as to be able to make other parts of the Fleisher more accessible.

It was in this moment that the Philadelphia Museum of Art, which has whole rooms in its collection already, was brought in as a potential new home for the lecture room.

“I am thrilled to know that one of Siah’s most important public works—‘useful for the folks,’ as he would say—will be preserved,” Barbara Armajani, the widow of Siah, said in the statement. “Siah so admired the work of Kahn and he was so happy he could honor him in the city of Philadelphia. Now it is an honor in Siah’s memory that the Museum is caring for the Lecture Room.”